N/A
This blue, berry-boosted beauty deals extra splash damage at a slower rate of fire - perfect for vanquishing the elusive, overly ambitious opponent.
Berry Shooter is a variant of Peashooter in Plants vs. Zombies: Garden Warfare. He was released for free along with the Tactical Taco Party DLC Pack in sponsorship with Aquafina FlavorSplash. He can be unlocked by opening his pack in the Sticker Shop.

The Berry Blast is the primary weapon of Berry Shooter; all facts below apply to a fully upgraded weapon.

This bespoke fruit press allows for more densely packed fruit in every clip.

Turns out the bluer the blueberry, the more damaging it is to Zombies!

The Berry Shooter is a master of vanquishes, and almost any player's strategy will suffice. For maximum effectiveness, it is recommended to get on very high ground, far away from enemies. At extreme long ranges, the Berry Shooter can still do 30 direct hit damage or 35 if hit in the head, and 15 splash damage. From here, the Zombies will stand no chance, and accept their imminent vanquish.

With the damage nerf applied in the Legends Of The Lawn DLC, the normal Peashooter and the Berry Shooter are more or less identical in terms of damage, but their main difference is that, in exchange for slower firing and a significantly smaller magazine size, the Berry Shooter has a noticeably wider splash damage radius, requiring less accuracy but being less powerful against fast-moving targets. 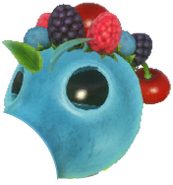 A promotional picture with Berry Shooter

Another promotional picture with Berry Shooter 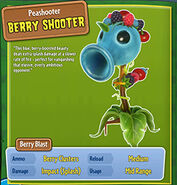