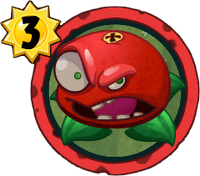 Berry Angry is a premium uncommon plant trick card in Plants vs. Zombies Heroes and a member of the

to play, and its ability gives all plants on the field +2

It is based on a cranberry, the edible berry of a group of evergreen dwarf shrubs or trailing vines in the subgenus Oxycoccus of the genus Vaccinium.

Its name is a portmanteau of the phrase "very angry," referring to its appearance and sound, and "berry," the type of plant it is based on.

Its description makes a play on the word "bury," using "berry" instead. It also makes a play on words between the phrase "that's the last straw," meaning someone is fed up with something, usually getting extremely angry as a result, and "strawberry," a type of berry.

Just like any trick that affects all plants at once, Berry Angry is most effective when the field is filled with plants. Since plants can have up to 10 fighters on the field due to their unique Team-Up trait, plants with Team-Up are recommended with this card, whether you play them yourself, or get them with cards like Mushroom Grotto and Shroom for Two. As Captain Combustible, you can easily boost Potted Powerhouse in your hand by playing Berry Angry when there are many plants on the field.

Double Strike, or those that have good abilities such as Re-Peat Moss. This will take advantage of their traits or abilities to make them more dangerous.

A noteworthy thing if your hero is Spudow: if you have plants with no strength, Spineapple, and Berry Angry at the same time in your deck, play Spineapple before Berry Angry because while Berry Angry gives +2

to all plants, Spineapple gives +2

to only plants that have a base strength of 0. If you reverse the order, Spineapple will only be able to boost itself because all your plants that originally had 0

. But if you play them in the correct order, Berry Angry will be able to further boost the 0

plants Spineapple had already boosted, raising their strength to 4.

If you made 8 or more sun and decide to play Berry Angry and Template:PvZHLink on the same turn, Berry Angry should not be used before Doom-Shroom as the latter can destroy plants boosted by Berry Angry. Instead, try to play Doom-Shroom before Berry Angry to minimize the potential damage of Doom-Shroom.

Since Berry Angry only increases plants' strength but not health, you can still destroy them without any extra difficulty, although the zombies facing them are most likely to be destroyed. Just be careful if you are against Captain Combustible, as he may be boosting Potted Powerhouse. 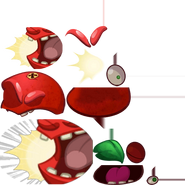 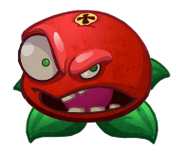 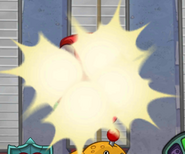 Berry Angry being played
Add a photo to this gallery 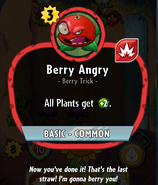 The player having the choice between Berry Angry and Template:PvZHLink as a prize for completing a level
Add a photo to this gallery
Retrieved from "https://plantsvszombies.fandom.com/wiki/Berry_Angry?oldid=2167631"
Community content is available under CC-BY-SA unless otherwise noted.