Bernie the Bee is a bee that floats around the Zen Garden in Plants vs. Zombies 2. He only appears whenever there is a plant whose growing time can be sped up. Upon tapping on him and picking such a plant, he will shorten the time of the plant's growth timer after one of his three animations of pollination is played. After speeding up a plant, he will take a nap and recharge for 15 minutes. His three animations have different levels of rarity (see gallery), the greater the rarity the longer the time shortened. 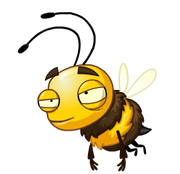 Bernie waving the player away

Bernie shrugging after the user taps and holds him

Retrieved from "https://plantsvszombies.fandom.com/wiki/Bernie_the_Bee?oldid=2267978"
Community content is available under CC-BY-SA unless otherwise noted.