For the Brain Buster in Plants vs. Zombies 2, see Beghouled (PvZ2).
Not to be confused with Beghouled Twist.

If a plant is eaten, a crater will appear in its place, similar to what happens after the Doom-shroom explodes. Plants cannot occupy craters, but spending 200 sun will fill them.

Each successful match will award the player with sun, which can be used to upgrade plants (not the upgrades from Crazy Dave's Twiddydinkies), fill in craters, and move the plants into new positions. If players make a longer chain, they get extra sun.

The mini-game's name, Beghouled, is a portmanteau on the popular PopCap game, Bejeweled and the word "ghoul," meaning an undead entity which refers to the zombies. 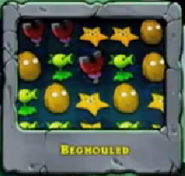 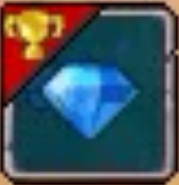 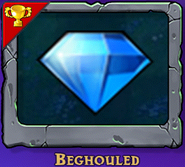 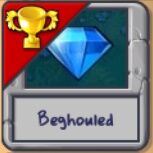 PC icon (completed)
Add a photo to this gallery

The lawn is already covered in plants when the mini-game begins, with a lone empty column at the zombies' point of entry. The plants cannot be dug up. While it is Night, there are no graves. The player starts out with basic plants, but can purchase upgrades, replacing Peashooters, Wall-nuts, and Puff-shrooms with Repeaters, Tall-nuts, and Fume-shrooms, respectively. If they purchase all of the upgrades in a single game, the player will get the Diamond Beghouler achievement in some versions (but not in any PC version).

Sun is gained by making plant matches. Three plants of the same kind in a straight line (vertically and horizontally, not diagonally) yields 25 sun, four yields 50 sun, and five yields 100 sun. Multiple matches with one flip gives more sun for addition flips, like how in Wall-nut Bowling and Wall-nut Bowling 2, multiple ricochets with one Wall-nut give more coins.

Note that as there are no Lawn Mowers and there is also no Garden Rakes; if a single zombie gets past all of the player's plants, the player loses.

Unlike regular levels, the winning condition of Beghouled is making 75 matches. As a round of Beghouled gets longer, the zombie attacks get stronger. Therefore, the highest priority is to make as many matches as quickly as possible, and not pay much attention in defending the house on the left from the zombies attacking from the right ( you will still lose the game if any zombie reaches the house on the left).

Another reason the highest priority is to make as many matches as quickly as possible, is because each match will drop sun, and you need sun to upgrade your plants as soon as possible. It is best to upgrade the Puff-shrooms to Fume-shrooms and the Peashooters to Repeaters before you upgrade the Wall-nuts to Tall-nuts because Wall-nuts and Tall-nuts can drop anywhere and are not usually right in front where they are effective. As the zombie attacks are weakest at the beginning, it is recommended to save up 1000 sun first in order to purchase the Repeater upgrade, although buying the Fume-shroom upgrade as your first plant upgrade is also fine.

Another reason that sun is useful in Beghouled is that you can spend 200 sun to fill in any crater that results if any of your plants are eaten. Having craters in your yard is disadvantageous because you have fewer plants to shoot down incoming zombies, but what is even worse about having craters in your yard is that you will have fewer plants with which to make matches.

Other strategic tips (Note, however, that making as many matches as quickly as possible is a higher priority than these other tips):

A set of craters

A Zombie Yeti in Beghouled

"Click-and-drag" in the early iPad version

By Windows10DzakiRD
Add a photo to this gallery 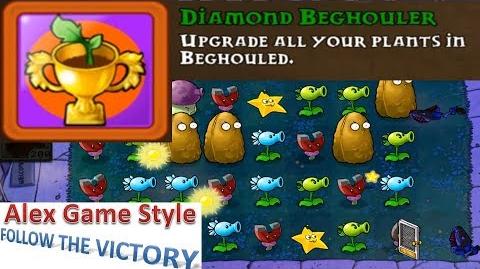 Retrieved from "https://plantsvszombies.fandom.com/wiki/Beghouled?oldid=2360515"
Community content is available under CC-BY-SA unless otherwise noted.