Pummels zombies for a total beetdown

Beetboxer was a VIP found in Plants vs. Zombies Adventures. It could deal a lot of damage, enough to kill a regular zombie in a single hit. It was a VIP version of the Beet. Its Plant Perk increased its damage.

Like their normal counterparts, the combination of Beetboxers and Hard-nuts or Wall-nuts could take out a line of zombies. The player obtained it after completing Park-n-Perish Level 3.

Like Beet, it is based on the beet (Beta vulgaris), but its design resembles a radish (Raphanus sativus subsp. sativus). It is also based on a boxer, a person who participates in boxing, a combat sport in which 2 people wearing protective gloves throw punches at each other for a predetermined set of time in a boxing ring.

Its name is a pun on the word "beatboxer," someone who makes beats with their mouth, because it is a beet that boxes, or "beet-boxer." It also wears a boxing helmet.

This prizefighter holds the world record for zombie knockouts. Floats like butter lettuce, stings like a beet! 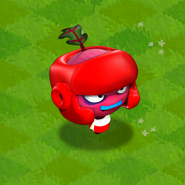