After reclaiming The Car Lot

Beet was a plant in the game Plants vs. Zombies Adventures. He headbutted zombies, and each headbutt damaged all the zombies on the attacked tile. He was unlocked after reclaiming The Car Lot.

He is based on the beet (Beta vulgaris), but his design resembles a radish (Raphanus sativus subsp. sativus).

Beet’s a brawler, a tough root from the streets who won’t back down no matter how many zombies line up to take a crack at him. If anything, that makes him even more into it.

Beet's headbutt dealt about two peas of damage. He also attacked all zombies stacked on top of each other. Beets and Wall-nuts made a useful combo, as Beet's area of effect attacked all zombies stacked by the Wall-nut and Wall-nut delayed the zombies which makes this strategy outstanding against Conga Lines (Conga Leaders and Conga Dancers). However, the main problem with Beet was that he relied too much on this combo. Otherwise, Beets would just weaken zombies that crossed his path before he got knocked out, wasting 25 sun per revival. A potential replacement for Wall-nut in the Wall-nut Beet combo was Snow Pea, which dealt more damage to zombies, but did not endure as much against higher stacks of zombies. Using all three deals with zombies in early and mid-game stages was very good but was particularly expensive.

When compared to Chomper from Plants vs. Zombies, Beet was more useful to an extent compared to Chomper. While Chomper can eat a zombie whole, he has a very long chew time until he is ready to eat another zombie. Beet might not instantly kill zombies, but was capable to rapid-attack and killing zombies in larger clumps, this making them better than Chompers.

The player got the Beet 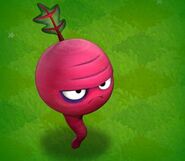 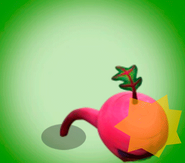 Beet during development of the game 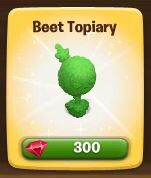 The Beet topiary in the store, along with how many gems were needed to buy it 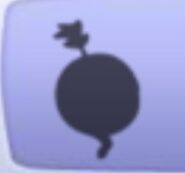