Beeshooter was a plant in the game Plants vs. Zombies Adventures. It was one of two VIP versions of the Peashooter (the other being Sweet Pea), and the player got 5 of them after winning Dire Spires Level 3.

It is based on Peashooter and a bee, a flying insect closely related to wasps and ants that are known for their role in pollination and for producing honey and beeswax.  Its name is a portmanteau between "bee" and "peashooter".

Beeshooter shoots bees butt-first. It may seem a little weird, but that’s okay. They have a system and it works for them.

Beeshooters are ideal for killing zombies either up-close or somewhat afar and have an excellent range with extra damage, compared to both Peashooters and Aspearagus. However, Beeshooters are not as useful as other plants because gems are required to be purchased to use Beeshooters. While it is true that 3 Beeshooters are given to the player on Dire Spires Level 3, these are best used in the Player's Town and not used in Road Trip Mode, unless the player has a very tough time beating a level. The Beeshooter deals equivalent damage per bee as a Beet (2 damage) headbutting a normal Zombie, and thus, can kill zombies twice as fast as Peashooters and slightly faster than an Aspearagus. They do the same damage as a Flaming Pea and are good against DJ Zom-Bs. The bees do not destroy ice blocks, so it is not necessarily better or worse than the Flaming Pea.

If the player decides not to buy any gems, they can afford up to five extra Beeshooters or can pair it up with two Power Flowers and buy two of them, along with two Beeshooters, instead of five.

While Plants vs. Zombies Adventures was in the closed beta stage of development, it was possible to get an infinite supply of Beeshooters for free by replaying Dire Spires Level 3 without moving on. After the game went into open beta, this exploit was fixed, and it is no longer possible to farm Beeshooters or other VIPs. 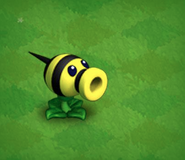 The player got the Beeshooter 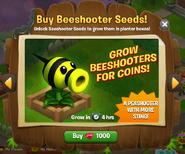 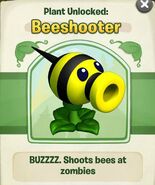