when you play a Bean.
When played: Gain two
1

Weenie Beanies.
"Every bean is accounted for. I assure you, they all add up."
Bean Counter is a premium super-rare plant card in Plants vs. Zombies Heroes and a member of the

every time a bean card is played and gives the plant hero two Weenie Beanies when it is played.

This ability stacks with each Bean Counter on the field and persists until all Bean Counters are removed from the field.

It is based on a bean, a common name for large seeds of several genera of the flowering plant family Fabaceae, and an accountant, a practitioner of accounting or accountancy.

Its name and appearance are both puns on "bean counter," a synonym of "accountant," as Bean Counter is literally a bean with a counter.

"Every bean is accounted for. I assure you, they all add up."

Bean Counter's stats, cost, and boosting ability are inferior to Muscle Sprout's, but it can differentiate with better synergy and the ability to supply you with more beans for it. Nonetheless, it can be a dangerous plant if used correctly.

First, you need to time when to play it. If it is played as soon as you make 4 sun, it may be destroyed very easily by tricks since you don't have any sun left to play other beans or boosting cards, but doing so would allow Bean Counter to be boosted early and benefit any other Bean Counters played after, due to providing you with 2 Weenie Beanies.

Green Shadow can take this further by having Captain Cucumber on the field to make the Weenie Beanies free, thereby allowing her to even play them on the same turn. On the other hand, playing it later guarantees more safety, but it might be too late for Bean Counter to make an impact. If you want to play it as soon as possible, playing it behind a Team-Up plant is the best choice.

As mentioned before, you need to play beans in order for it to be stronger. Weenie Beanie is a basic, yet cheap way to make Bean Counter stronger; however, this is not a reason to pack them in your deck. Instead, Admiral Navy Bean and Sting Bean are better due to their Amphibious trait and actual viability in a deck.

You can also use Lima-Pleurodon, Sow Magic Beans, or Moonbean to generate Magic Beanstalks into your deck, although there is no guarantee of you drawing Magic Beanstalks whenever you need them and Green Shadow is the only smarty hero with reliable card draw.

It can pair up very well with Jelly Bean too, as the Weenie Beanies can be used for its Evolution.The last example is Onion Rings, as it can boost your Weenie Beanies into major threats. However, it can also weaken your other plants.

Be wary of Quickdraw Con Man, as you will take 2 unblockable damage upon playing Bean Counter.

Bean Counter has low stats and cannot be boosted if it is played as soon as your opponent makes 4 sun, but if it is left unharmed, its stats can go up very quickly. Since it is unlikely for your opponent to play it in front of a zombie on turn 4, you should play a trick (Bungee Plumber, Rolling Stone, the like) or intercept it with a strong zombie the next turn.

If Bean Counter's stats go out of control, play Rocket Science or Locust Swarm. Should you be swarmed with beans, The Chickening is an effective answer as most beans have low health and can be taken out, leaving Bean Counter by itself.

Bouncing this should be a last resort, as while its stats will be reset, your opponent can replay it for more Weenie Beanies and then abuse them again for even more boosts.

You can also have Quickdraw Con Man on the field to deter your opponent from just playing Bean Counter. 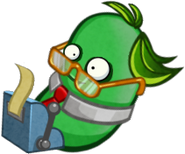 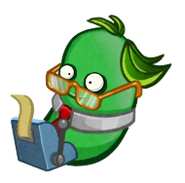 Bean Counter with the

Nibble being played on Bean Counter 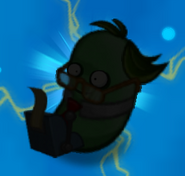 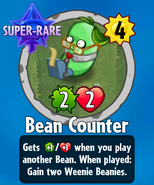 The player receiving Bean Counter from a Premium Pack

Bean Counter on the field