Space Cadet Zombie.
A sure way to get Space Cadet's attention.
Beam Me Up is an premium  uncommon zombie trick card in Plants vs. Zombies Heroes and a member of the

to play, and its ability makes a Space Cadet on a selected lane. Its closest plant counterpart is Nut Signal.

Its name is a reference to the infamously misquoted phrase "Beam me up, Scotty" from the science fiction TV show, Star Trek, which was, on reality, never said.

A sure way to get Space Cadet's attention.

This trick makes a zombie with decent stats that won't fail you in combat. Furthermore, since zombie tricks are played after plants play, you can play this trick as you would play a 2

zombie without being affected by plant abilities or tricks, with the exception being Brainana. You can play this trick on a lane with a plant that has 2 strength or less to keep it alive, as well as destroying that plant if it has 2 health or less as well. As a worst case scenario, this can at least block a powerful attack from a plant with a lot of strength for a cheap price of 2 brains.

Since Space Cadet is a science zombie that is made by this trick, you can combine this with Zombot Drone Engineer or Gadget Scientist to make a powerful combo with bonus attacks and more power, or transform Interdimensional Zombie.

Because this trick makes Space Cadet, Professor Brainstorm can use it in tandem with Unlife of the Party to give him a boost. As any Brainy hero, you can use this trick along with Paparazzi Zombie, Trick or Treater, Mad Chemist and Trickster, as the former will get boosted, the other two will both Conjure tricks (for Trick or Treater's case, a Sugary Treat or a Healthy Treat), and the latter will cost less for a cheap price and doesn't leave you vulnerable on the field.

This trick is difficult to combat, as it makes a zombie with above average stats as early as the second turn. And because it is a trick, there is no telling where it will be played. In addition, it is a science zombie, meaning Zombot Drone Engineer can boost its strength, which can be troubling early in the game. But usually, your opponent will either play it to take care of weak plants or attack you directly. Any plant with Team-Up can be played to protect your plants, good examples being Wall-Nut and Potato Mine.

Like with all dangerous zombie tricks, you can also play Black-Eyed Pea and/or Sportacus to prevent your opponent from playing this. 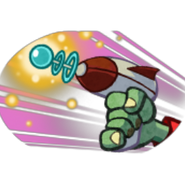 Beam Me Up being played

Beam Me Up's statistics, notice the lack of dirt

The player having a choice between Beam Me Up and Lurch for Lunch as the prize for completing a level before update 1.2.11

The player receiving Beam Me Up from a Premium Pack

Beam Me Up on Professor Brainstorm's Hero Pack 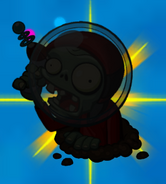 The player receiving Beam Me Up from a Premium Pack