Descends down from the sky with a speaker, crushing your plants at the same time.

Summons a speaker that damage plants with shockwaves, but can have them reflected by MC Glory

You can't prevent the Bass Zombie from playing his bass with his life, unless his speaker is crushed. By the way, Bass Zombie's catchphrase is: "Come challenge me or shut up!"

Bass Zombie (also referred to as Bassist Zombie) is the fourth zombie encountered in Neon Mixtape Tour in the Chinese version of Plants vs. Zombies 2. He appears through the ambush "Bassist Zombie debut!", spawning in a similar fashion as Lost Pilot Zombie, along with a speaker. He drops onto a random tile, crushing any plants currently there, then begins to jam away. Regardless of what the current jam playing is, he will send out shock waves every couple of beats. Once his speaker is destroyed, he will break his bass guitar in rage, then creep towards the player's lawn as a zombie with mediocre toughness.

Bass Zombie has a tall blond mohawk that falls forward near the front. He wears white makeup with black steaks around his eyes. He wears a maroon jacket with no shirt underneath, revealing blond chest hair. The sleeves are purple cuffs at the end. The pants he wears are also maroon.

His shoes are black with maroon trim, and he appears to have metal heels.

Bass Zombie is a very deadly zombie if given enough time. He is Neon Mixtape Tour's ambush zombie, and will only appear on the lawn through the ambush "Bassist Zombie debut!" They are immune to Blover and Hurrikale's instant kill ability, despite being airborne when they drop. They are annoying alone, but when they drop in large numbers, you defenses will suffer greatly. The speaker is the most deadly trait the zombie has as he can draw fire away from more dangerous zombies, and even protect himself all while dealing passive damage and firing shock waves. Depending on the current jam, Bass Zombie will fire out shock waves at different intervals. (This is because jams increase or decrease a zombie's animation speed) The best way to defeat them is to simply have a strong offense, or use instant kills. Destroying the speaker will make the Bass Zombie act like a normal zombie. Apply the same tactics one would use for Lost Pilot Zombie and Bug Bot Imp, as he shares many traits with them. Be wary; any plant under the speaker when he drops will be destroyed. Infi-nut will only have its hologram destroyed, but not the projector, effectively negating Bass Zombie if it can regenerate fast enough. Laser Bean and Fume-shroom are useful for killing Bass Zombie, as the speaker cannot absorb the damage. MC Glory is still the best plant for countering this, but it is difficult to unlock under normal circumstances. In addition, leveling up plants can help, especially since some plants like Homing Thistle when leveled up can easily deal with the speakers when planted. Another way is to use lobber plants like Winter Melon, since they ignore the speakers and will attack Bass Zombie directly.

Using a Lava Guava is really useful for this zombie, because one of them instantly kills both the Bass Zombie and his Speaker. 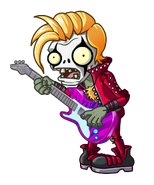 Bass Zombie firing a shockwave at a Repeater 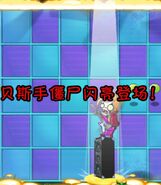 Bass Zombie appearing on the lawn with his speaker (stage 1)

Bass Zombie appearing on the lawn with his speaker (stage 2)

Bass Zombie without his arm 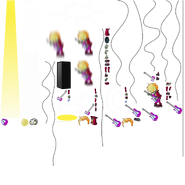 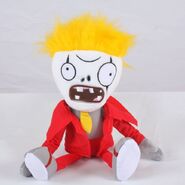 Retrieved from "https://plantsvszombies.fandom.com/wiki/Bass_Zombie?oldid=2283124"
Community content is available under CC-BY-SA unless otherwise noted.