Able to use Bullhorn Swarm every 7 seconds
Basecoat Bert is a Zombie Battle Leader in Plants vs. Zombies: Battle for Neighborville. He resembles an Engineer wearing the "Painterly Splotchwork" Costume.

Basecoat Bert is one of the more annoying battle leaders to deal with, due to the wave of Engineers spawning alongside him who can continuously stun you with Bullhorn Swarm, as well as his own capability to use it every seven seconds. Use Peashooter's Pea Gatling or Sunflower's Sunbeam to attack him. A lot of damage can be dealt with this, even with if the player stunned from the constant strikes from Bullhorn Swarms.

One other way is to use Chomper and then Burrow him to instantly win the battle, as, unlike other Battle Leaders, he can be swallowed by Chomper, but this can take a couple of tries because of the Bullhorn Swarms. 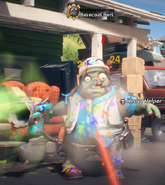