For the version in the Nintendo DS version of Plants vs. Zombies, see Baseball Zombie.

None
Home run. Running for your home. It's all the same to him.
Baseball Zombie is a basic common zombie card in Plants vs. Zombies Heroes and a member of the

. He does not have any traits nor abilities.

He is the basic zombie of the Hearty class.

He is based on the zombie in the Nintendo DS version of Plants vs. Zombies with the same name and appearance.

His card description references a "home run"; in baseball, when a player scores a "home run," they are allowed to immediately go around the playfield, scoring a point.

Home run. Running for your home. It's all the same to him.

As Hearty's basic zombie, Baseball Zombie is outclassed by many other uncommon zombies from other classes that cost 1 brain like Dog Walker, Chimney Sweep, Tennis Champ, and Headstone Carver, as well as all other Hearty zombies, especially Arm Wrestler, which can be seen as a direct upgrade to Baseball Zombie, since they have the same tribes, class, and cost, but with Arm Wrestler having higher base stats and a useful ability.

However, since he is a sports zombie, Baseball Zombie can possibly wreak havoc with Team Mascot and Zombie Coach, and being so cheap and weak, he also serves as good Ev​​olution fodder for Chum Champion (although putting Baseball Zombie deliberately in your deck for that purpose only is not highly reccomended).

Baseball Zombie is very weak, so he shouldn't be much of a threat, although he can be a bit of a threat if Zombie Coach is protecting him, as well as Team Mascot boosting him. 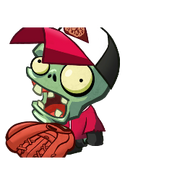 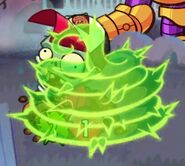 Baseball Zombie being attacked by Sunflower

Baseball Zombie with a star icon on his strength

Baseball zombie with the

Baseball Zombie about to do an