For the version in Plants vs. Zombies Heroes, see Baseball Zombie.

The Baseball version of a Zombie.

Similarly to many other zombies, Baseball Zombie's main target is the house. When the player reaches at least 27 home runs, its speed will increase.

Note: The following almanac entry was created using official text[1] from the Plants vs. Zombies: Sticker Album book and does not appear in-game.

This Zombie is easy to deal with, as long as you can fling the basketballs back at the Zombies, you'll be able to fight them off easily. They get faster later on, however. Use Chomper and Potato Mine to deal with one or a few Zombies at once, and use Wall-nut to stall Zombies to group up so one Potato Mine can clear them out. Cherry Bomb and Jalapeno should be used to deal with large groups.

HD Baseball Zombie with a mitt

HD Baseball Zombie with a grass background behind it

Baseball Zombie on the top and bottom screen 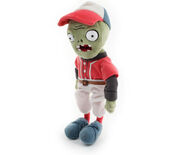