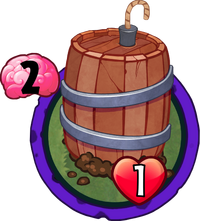 When destroyed: Do 1 damage to all Plants and Zombies, then make a 4/3 Captain Deadbeard here.
No monkeys, just Zombies.

Barrel of Deadbeards is a premium legendary zombie card in Plants vs. Zombies Heroes and a member of the

. It does not have any traits, and its ability does 1 damage to every plant and zombie on the field, then makes a Captain Deadbeard on its place when it is destroyed.

It is based on one of Captain Deadbeard's abilities in Plants vs. Zombies: Garden Warfare 2 with the same appearance.

Its name is a portmanteau of the names Barrel of Monkeys, a toy game released by Lakeside Toys in 1965 involving a barrel and monkeys, and "Deadbeards," referring to the zombie made by its ability.

Its description is also a reference to Barrel of Monkeys.

When the player is playing this, keep in mind that if the opponent is smart enough, as they may simply ignore it. However, to counteract this, the player can use Fireworks Zombie, which not only forces Barrel of Deadbeards to create a Captain Deadbeard, but also deals two damage to everything on the field. It can also be played in front of a damaging plant already on the field. Another clever strategy is to boost it using cards like Brute Strength, Orchestra Conductor, Loudmouth, or Monster Mash to put your opponent into a dilemma: If left unblocked, it will keep doing damage. If they play a plant to block it, that plant will be badly hurt or destroyed. Do not boost this too much, as your opponent is going to destroy it without hesitation if you make it stronger than Captain Deadbeard.

It is a better idea to play this along with either Teleport or Teleportation Zombie, as the player can play this zombie during the Zombie Tricks phase, and allows the player to place it in a lane with attacking plants. However, you can only do this with Professor Brainstorm.

Combining this with Super Stench as Impfinity can make this a cheaper and weaker version of Zombot 1000's ability, which would be ideal as it would destroy every plant on the field that doesn't have the

Armored trait, or is Shielded. When this is played and Barrel of Deadbeards is destroyed, its

Deadly trait will be able to destroy every plant on the field, resulting in a player that is either low on cards or health to easily lose. This effect does destroy zombies as well, however, making it a last resort. If Super Stench is not available, then Impfinity could use Barrel of Barrels, Laser Base Alpha, or Zombot Sharktronic Sub (technically) for the same effect.

Each card has its own strengths and weaknesses:

But whatever the card is, your opponent may destroy it to purposedly to activate "When destroyed" abilities of their own plants right away such as Punish-Shroom's and Grapes of Wrath's, so watch out for that.

Note in mind that its ability damages zombies as well, and destroys 1

zombies such as Pool Shark, Cuckoo Zombie, and Impfinity Clone. However, you can take advantage of this by pairing it with zombies that benefit from being hurt or destroyed. A good example is Jester, as Barrel of Deadbeards will activate his ability upon being destroyed. Having a Jester or two and a Barrel of Deadbeards on the field before playing a Fireworks Zombie on the field can do lots of damage, as the Jester will first be hurt by the Fireworks Zombie, then by the Barrel of Deadbeards, causing 4 damage to the plant hero for each Jester that gets hurt. Newspaper Zombie is also a good zombie to use with this, as he will gain +4

when Barrel of Deadbeards is destroyed.

But if you don't want your zombies to get hurt at all, using

Armored zombies or shielded zombies will do. However, this is only possible as Z-Mech.

As Barrel of Deadbeards does absolutely nothing until it is destroyed, you can simply leave it alone until your plants can easily take its ability. You only have to avoid plants that can attack on multiple lanes like Threepeater or have the Splash Damage trait like Lightning Reed, and plants with a damaging/health-degrading ability like Sour Grapes and Kernel Corn. However, if Barrel of Deadbeards has the

Deadly trait (or if Zombot Sharktronic Sub is on the field), it may be better to destroy it early and sacrifice your weak plants so that you won't lose your stronger plants later.

Guardian heroes can counter Barrel of Deadbeards pretty well, and that is with a nut deck; If there is at least one Mirror-Nut and many other nuts on the field, it can result in your opponent being heavily damaged. However, Citron can negate it using any deck thanks to Peel Shield, his signature superpower.

Retrieved from "https://plantsvszombies.fandom.com/wiki/Barrel_of_Deadbeards?oldid=2219960"
Community content is available under CC-BY-SA unless otherwise noted.