Deadly.
Conjure a Barrel.
If you put a container in another container, you'll have twice the storage space!
Barrel of Barrels is a colossal uncommon zombie trick card in Plants vs. Zombies Heroes and a member of the

If you put a container in another container, you'll have twice the storage space!

This can be a very powerful card if used correctly. The

Deadly trait gained from the ability has the potential to destroy any powerful plant with even a weak zombie such as Swabbie. You can also use this on a zombie with the

Strikethrough trait to allow it to destroy two plants at once.

As for its Conjuring ability, you've got nothing to lose as every barrel card in this game has its uses, from weak ones like Loose Cannon or Genetic Experiment to powerful ones like Barrel of Deadbeards or Zombot Battlecruiser 5000. Also, since Conjuring can activate Dino-Roar, you can use it in tandem with Dino-Roar cards like the previously mentioned Tankylosaurus.

While being a cheap and efficient trick, its former ability is quite easy to counter, as the only thing you need to do with the

Deadly zombie is to destroy,

Freeze, or Bounce it. If the zombie only has 1 strength, use

Armored plants to negate the ability.

Barrel of Barrels' grayed out card 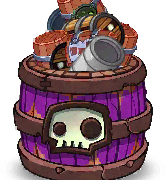 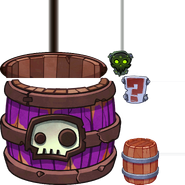 Barrel of Barrels being played (1)

Barrel of Barrels being played (2) 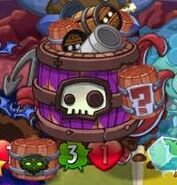 Barrel of Barrels being played (3)

Barrel of Barrels being the featured card in the menu for the November 29th, 2017 Daily Challenge