3 minutes
Barrel Zombie gets all his barrels from Barrel Zombie Discount Barrel Supply Chain, which was really struggling before the zombie apocalypse.
Barrel Zombie was a zombie from Plants vs. Zombies Adventures. He acted like normal zombies usually do, walking and eating plants. However, when his barrel was destroyed, he ran very fast and did not eat any plants, except for Wall-nuts, Hard-nuts, and unarmed Popcorns directly in his path.

He is named after a barrel, a hollow cylindrical container traditionally made from wooden staves bound by wooden or metal hoops, specifically the one he is wearing around his body.

Barrel Zombie gets all his barrels from Barrel Zombie Discount Barrel Supply Chain, which was really struggling before the zombie apocalypse.

The barrel can be destroyed in one shot from a Flaming Pea, rendering him much easier to destroy. His speed doubles when the barrel is destroyed and ignores all plants other than a non-adjacent Wall-nut, Hard-nut, or an unarmed Popcorn.

When using Barrel Zombie in other towns, after the barrel is broken, he runs extremely fast, avoiding other plants. This makes an effective way of entering the house quickly. However, Wall-nuts, Hard-nuts, and other barriers in his path can stop this. 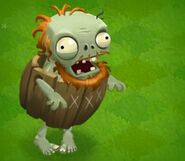 Barrel Zombie without his barrel (and right arm)

Barrel Zombie's trash (planks and a cork from his barrel) 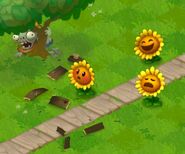