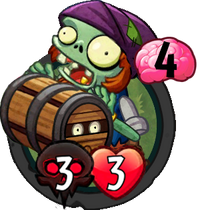 Swabbie Imps with Amphibious next door.
The second-most affordable way to transport Imps.
Barrel Roller Zombie is a premium rare zombie card in Plants vs. Zombies Heroes and a member of the

Deadly trait, and his ability makes a Swabbie on the lanes adjacent to him when he is destroyed, unless those lanes are occupied. His closest plant counterpart is Banana Split.

His description implies that Gargantuars are the most affordable way to transport Imps.

, Barrel Roller Zombie isn't a very good attacker. And while he does have the

Deadly trait, Smelly Zombie is a better alternative for a

Deadly zombie, as he is cheaper and has more health along with the Gravestone trait, meaning he is immune to all plant cards except for anti-gravestone cards. So instead, Barrel Roller Zombie can find his place as a defensive

Deadly zombie, as the Swabbies may block attacks from strong plants that are close together, even on aquatic lanes as Swabbie has the Amphibious trait.

As Impfinity, Barrel Roller Zombie goes well in a rush deck for Valkyrie and Frankentuar, as he could be used in order to destroy a strong plant during combat, then he will be destroyed and leave the two Swabbies who will also be destroyed sooner or later, and have Valkyrie get +6

. Similarly, Unlife of the Party will get +3

assuming both Swabbies are made successfully.

Strikethrough trait. And while Barrel Roller Zombie isn't an Imp himself, his Swabbies are, allowing him to fit in an Imp deck with Toxic Waste Imp and Imp Commander too.

Due to him having the

Deadly trait and low health, there is little to no reason to use a strong plant against it. Instead, if you have the opportunity, destroy him indirectly with tricks, such as Berry Blast, as he will be destroyed without making you lose a potentially useful plant. Plants with the Splash Damage trait are also preferable, as they can hit him even if they are not on his lane. Melon-Pult and Snapdragon would be the best examples, as their Splash Damage is just enough to destroy Barrel Roller Zombie.

Retrieved from "https://plantsvszombies.fandom.com/wiki/Barrel_Roller_Zombie_(PvZH)?oldid=2363164"
Community content is available under CC-BY-SA unless otherwise noted.