Not to be confused with Berry Blast.

N/A
Hop inside your trusty barrel to shield yourself from attacks, but that's not all! Light the fuse and run towards your Plant foes an explosive surprise.

15 sec.
Hide in a short-fused powder keg. Light fuse with [?].
Barrel Blast is an ability for Captain Deadbeard in Plants vs. Zombies: Garden Warfare 2 and Plants vs. Zombies: Battle for Neighborville. When used, Captain Deadbeard hides in a wooden barrel with a fuse on it. The player triggers the fuse which leads to the explosion of the barrel after a certain amount of time. When Captain Deadbeard is in the barrel, he will move slower than usual, but after he triggers the fuse, he moves faster. The explosion does up to 150 splash damage to the plants. The player also takes 75% less damage while in the barrel.

In Plants vs. Zombies: Battle for Neighborville, the ability has been reworked to shield Captain Deadbeard from damage while still retaining the ability to explode. The barrel can take up to 100 points of damage before breaking, removing the option to detonate it if done quickly enough. In addition, if a plant aims for the eye hole in the barrel, they can damage Captain Deadbeard normally though this eye hole is miniscule.

Hop inside your trusty barrel to shield yourself from attacks, but that's not all! Light the fuse and run towards your Plant foes an explosive surprise.

Yo ho ho, it's a barrel made of shiny treasure! Protect yourself from plants in style, and blast them away with a glittery explosion!

Hide in a short-fused powder keg. Light fuse with [Attack].

This should be used either as a sneak attack for snipers or as a way to get away from the plants. Most commonly, you'll use this in Team Vanquish to get some vanquishes, or in Herbal Assault, when you must retreat to the next objective and need extra protection. Gnome Bomb and Suburbination are also good, since plants must go to specific objectives. If you're in the barrel, they'll have to think twice of approaching. You should never run into the plants in your barrel when you're at low health, despite having damage reduced in the barrel. So overall, this ability can be used in a similar fashion to the Turbo Twister.

If there are multiple plants, this can be extremely useful as you can use it to kill or severely damage other plants around you, along with it's short recharge. In Graveyard Ops, this can be useful against bosses, as they will not attack you.

Note that Spikeweeds automatically cancel the barrel without activating it, and leave you completely helpless as you are likely to be close to the plants. Avoid them at all costs and if there is no easy way to approach, simply retreat with the barrel.

Simply run away from it with something like Hyper. Most classes have a good way to quickly flee from the barrel unharmed, and as the explosion's range is extremely short, it should be easy to escape unscathed.

Note that some abilities will immediately cancel the barrel, while others will restrict its movement so much that the explosion is too far away from the player that the barrel is worthless. Such abilities include Goop, EMPeach and the aforementioned Spikeweeds. Ice variants can also try to freeze the barrel, stopping it from moving completely.

Remember that the barrel's damage reduction is not to be underestimated, so unless the pirate entered it with low health, it is unwise to try and vanquish the pirate inside, even with powerful abilities such as the Shuck Shot or Chili Bean Bomb.

This ability has a rather inconsistent hit detection, so it's not recommended to continuously use this as it won't deal any damage if it doesn't register the hits to the enemy, which may potentially get yourself killed instead. It's recommended to use the Incoming Keg upgrade as it will increase your movement speed while inside the barrel by 75%, allowing you to approach running enemies with ease.

With most plants, it's recommended to run away from the barrel, unless if the opponent is using upgrades that increase their movement speed while inside the barrel, as you may not be able to outrun them. In that case, either use abilities that allow you to dodge them, such as Acorn Dash or Husk Hopping towards a higher place, or try to attack them as fast as possible. While the barrel is quite durable, it's not indestructible by any means.

Acorn is the best character to counter this ability, as he is able to deal more damage against shields than other characters. Continuously attacking the barrel with his primary weapon without missing a shot is guaranteed to destroy the barrel before the opponent is able to detonate it. However, if you can't attack them quickly enough and they already triggered the detonation, simply use Acorn Dash before it explodes.

Barrel Blast as seen in the trailer

Captain Deadbeard using Barrel Blast against a group of Weeds

Captain Deadbeard using the Barrel Blast ability (about to explode) 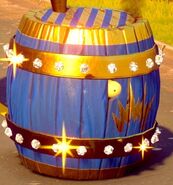