Drinks a potion that makes him invisible

(can stun him, preventing him from using his ability)

As a professional, Bandit Zombie had a lot of professionalism in life. To better fulfill his moral obligations, he specifically got a wizard to make an invisibility potion for him. The effects of the potion are very obvious, but the side effects are somewhat big...

Bandit Zombie (盗贼僵尸; pinyin: dàozéi jiāngshī) is a zombie encountered in Dark Ages in the Chinese version of Plants vs. Zombies 2. He drinks a potion that makes him invisible to both players and plants. The invisible effect also makes the zombie nearly impervious to damage. A Plantern reveals nearby Bandit Zombies.

Bandit Zombie is dressed like a thief. He wears a dark green colored robe that extends up to his elbows. For eyewear, he wears a black colored eye mask and his eyes are shaped like oblongs. Bandit Zombie wears a dark blue colored tattered shirt with straps on it, also, the left portion is torn up and exposes its bones slightly. The pouch on his left rib contains a potion that he typically uses for stealth purposes. His bones are also colored dark green and his shoes bear similar a color to its garments.

This zombie can be problematic, leaving the player no other choices besides using Plantern. Use a Plantern to prevent the Bandit Zombie from being invisible. Kill him quickly, as this zombie can disappear without you noticing. Another way to defeat him is to use Plant Food on Iceberg Lettuce or Saucer Squash to prevent the zombie from vanishing. Avoid using Torchwoods when this zombie is frozen by an Iceberg Lettuces or the delay will be undone, and this zombie may vanish quickly when thawed. Fortunately, this zombie is not immune to the Chili Bean or Hypno-shroom. so use it if the zombie is invisible and the player know where he's going. 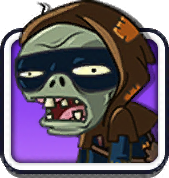 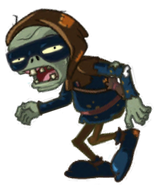 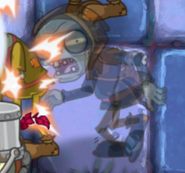 A level 2 Bandit Zombie about to drink his potion 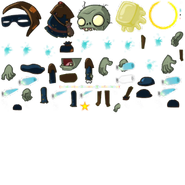 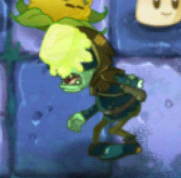 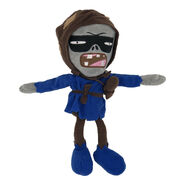 A plush Bandit Zombie
Add a photo to this gallery

Retrieved from "https://plantsvszombies.fandom.com/wiki/Bandit_Zombie?oldid=2338388"
Community content is available under CC-BY-SA unless otherwise noted.