Rare
After robbing the Zomboss Express the bandit Cactus retired investing her loot in a fix-er-up resort hotel where she spends the majority of time greeting guests and apologizing about the shoddy accommodations.

Rare
After robbing the Zomboss Express the bandit Cactus retired investing her loot in a fix-er-up resort hotel where she spends the majority of time greeting guests and apologizing about the shoddy accommodations.
Bandit Cactus is a Rare variant of the Cactus in Plants vs. Zombies: Garden Warfare and Plants vs. Zombies: Garden Warfare 2. She was released in the Zomboss Down DLC pack.

After robbing the Zomboss Express the bandit Cactus retired investing her loot in a fix-er-up resort hotel where she spends the majority of time greeting guests and apologizing about the shoddy accommodations.

The primary weapon of Bandit Cactus is the Gatling Needle; all facts below apply to a fully upgraded weapon.

The Bandit Cactus' primary weapon is the Gatling Needle. It deals less damage than the standard Spike Shot at 9 impact damage and 10 critical damage. It compensates for this by being a fully automatic weapon.

Staring down Zombies in an even more fierce fashion improves her reload time.

Stitched some extra slots in her bandolier, increasing ammo capacity.

Sharpening her needles has increased their damage. She can't believe she didn't think of that earlier.

The Bandit Cactus is well-suited for close-range combat with the ability to fire automatically with each needle dealing about 9 to 11 damage, allowing her to deal a relatively large amount of damage to opposing zombies. This makes it capable of defending the garden in Gardens & Graveyards at a much closer distance than usual and with her above-average projectile damage, if given proper support, she can even take down an All-Star without too much trouble.

Be advised though, that the automatic firing only moves the Bandit Cactus from being a support class to being a defensive class, not an offensive class. The needles deal a large amount of damage at close and mid range but are sub-par at dealing with long range targets compared to other Cactus variants. The Bandit Cactus excels at ambushing but it also retains the Cactus' below-average foot speed so this further discourages players from actively attacking and instead encourages the player to stay near the objective and attacking any approaching zombies. If you want to go long range, it is advised to get the zoom upgrade.

If the player favors more offensive gameplay, the Peashooter is a much better choice for this task. This is because of his faster movement speed, and his powerful abilities. Bandit Cactus is a more passive attacker. 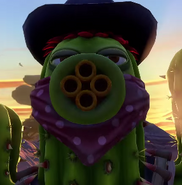 Bandit Cactus in the Zomboss Down trailer 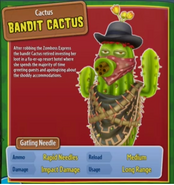 Bandit Cactus on a poster in the Backyard Battleground 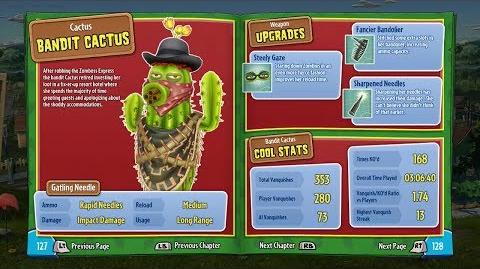