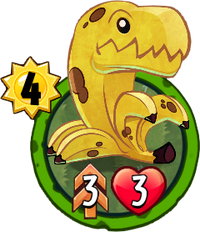 Not to be confused with Tyrannosaurus Rex, a dinosaur and environmental modifier in Plants vs. Zombies 2.

.
She's a banana first and a dinosaur second. But it's a close second.
Bananasaurus Rex is a premium legendary plant card in Plants vs. Zombies Heroes and a member of the

Double Strike trait, and her Dino-Roar ability gives her +1

She is based on the banana, an edible fruit, botanically a berry, produced by several kinds of large herbaceous, flowering plants in the genus Musa; and the Tyrannosaurus, more commonly known as the species Tyrannosaurus rex, a genus of coelurosaurian theropod dinosaur.

She's a banana first and a dinosaur second. But it's a close second.

Aside from pure stat-boosting cards, you can also increase her stats by drawing and conjuring cards, examples being Flourish and Holo-Flora. Party Thyme is a very good choice too, since Bananasaurus Rex does a bonus attack after she has finished attacking in the Fight! phase, causing it to draw at least one extra card per turn. While all other classes have ways to draw cards as well, Green Shadow is arguably the best hero in terms of card draw due to the

while Re-Peat Moss does a bonus attack. With Party Thyme as well, you will draw another card, boosting Bananasaurus Rex's stats by +1

Bananasaurus Rex can also act as a superior alternative to Repeater; while she does not benefit from Torchwood or The Podfather, she will outperform the combo given a few turns.

But due to her being able to amass her stats greatly, she will become a prime target for instant-kills and certain zombies. Fortunately, the Mega-Grow class does have access to Umbrella Leaf, who can make Bananasaurus Rex immune to tricks. As for zombies, every hero has a way to deal with them: Grass Knuckles and Green Shadow have Team-Up plants to protect Bananasaurus Rex (Green Shadow can also Bounce zombies), while Captain Combustible and Chompzilla have removal cards.

While Bananasaurus Rex is a very strong plant, countering her shouldn't be too hard if the player is smart enough. When turn 4 comes along, save some brains as she will most likely be played, then, make use of removal cards such as Exploding Fruitcake, Knockout, or Stayin' Alive to deal with her before she can grow. If none of these options are available, make use of Final Mission with any zombie, preferable Barrel of Deadbeards to outright destroy her, leave a good body on the field, and do 1 damage to all plants. You can also make use of

Deadly zombies to destroy her without much issue, although unless you are Super Brainz or Huge Gigantacus and have Teleport, you will be forced to take 6 damage or lose a zombie as you will have to wait until next turn.