Move a Zombie.
Conjure a Banana.
A slapstick comedy staple that, somehow, the Zombies never see coming.
Banana Peel is a galactic rare plant trick card in Plants vs. Zombies Heroes and a member of the

to play, and its ability moves a selected zombie to a selected lane and Conjures a banana card. Its closest zombie counterpart is Terrify.

It is based on a banana peel, an outer covering of the banana fruit.

Its ability and description are references to the common gag of slipping on a banana peel.

This is an excellent card to have in most decks. Moving a zombie out of the way of your powerful plants results in massive damage to your opponent, especially when they have a scheme with the placement of their zombies.

It is also very cheap, costing only 1

. And not only that, it also Conjures a banana. The banana card you can Conjure ranges from another Banana Peel to a Banana Split to a Brainana, but every banana in the game has its uses, whether major or minor, and will not be completely useless.

Take note that since it Conjures a card, Captain Cucumber can make the Conjured card cheaper while Dino-Roar plants will activate their Dino-Roar abilities when you play this trick.

To know what cards you can Conjure, here is a list of all banana cards in the game:

You can't do much about your zombie being moved, but

Sneaky heroes can pack a Smoke Bomb to move the affected zombie back into place, with +1

as a bonus. If you are playing as a

Hearty hero, and you happen to have a Sumo Wrestler in a gravestone or a Terrify at the time, you can somewhat counter what they did if they moved that zombie away from a powerful plant, since you can move said plant back to that zombie's lane. Neptuna has both of these classes, so she may be the best counter for this.

Heroes like Chompzilla and Captain Combustible may be moving your Amphibious zombies because they are in the aquatic lane and unable to be taken care of without removal cards. In that case, a

If you rely on tricks, beware of the possibility of Brainana being Conjured. 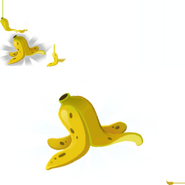