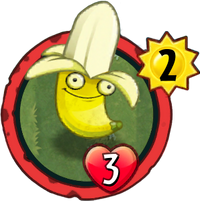 For the version in Plants vs. Zombies 2, see Banana Launcher.

Start of turn: Gain a Banana Bomb.
He only knows one word. But it's a good one.
Banana Launcher is a galactic super-rare plant card in Plants vs. Zombies Heroes and a member of the

. He does not have any traits, and his ability adds a Banana Bomb into the plant hero's hand at the start of every turn.

His description alludes to his line "Banana!" which he shouts when he fires a banana in Plants vs. Zombies 2.

He only knows one word. But it's a good one.

This card has mediocre stats for his cost, with no strength and slightly above-average health. However, since he gives you a Banana Bomb every turn, he can be used to assist your control of the early game.

Captain Combustible is arugably the hero that can use Banana Launcher the best. First of all, he can use this as a cheap way to activate Re-Peat Moss' ability, allowing him to rack lots of damage on a zombie. He also has much more efficient ways to boost Banana Launcher than other heroes, such as Fertilize. Another thing to note is that the Banana Bombs gained from Banana Launcher's ability count as Conjured cards, so Captain Cucumber can help this around by making them free. As for the other heroes, Nightcap and Spudow have their fair share of protection, being the Amphibious trait via Lily Pad and a wide selection of Team-Up walls, respectively. Solar Flare, however, has none of the following, so she has to resort to removing every zombie threatening Banana Launcher, which can be bad for her card management.

Since Banana Launcher adds a card to your hand at the start of every turn, he synergizes well with Dino-Roar cards, although there are better cards to use in that regard if you are playing as Captain Combustible.

Banana Launcher's weakness is his lack of strength, rather low health, and the lack of the Team-Up trait, which are crippling for a plant that needs to stay alive for long. While the Banana Bombs he adds can be of some help, it is only a temporary solution. Therefore, stat-boosting, the Amphibious trait, or Team-Up cards are necessary to keep Banana Launcher alive for longer. It is also recommended to deal with any Quickdraw Con Men on the field as fast as you can, as every time one Banana Launcher activates his ability, each will do 1 unblockable damage to you.

Stat-wise, this plant is no threat at all. However, he could potentially ruin your early game by allowing the plant hero to damage and possibly finish your zombies off with the Banana Bombs given. If that is what you fear, you can simply use Rolling Stone or Weed Spray to destroy this plant. But in the late game, this plant will be less of a threat as the Banana Bombs won't do very much against the tougher zombies. Still, be on the lookout for Dino-Roar cards, and Re-Peat Moss if your opponent is Captain Combustible.

You can also have Quickdraw Con Man on the field to deter your opponent from just playing him. 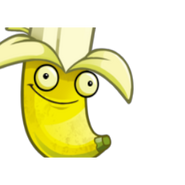 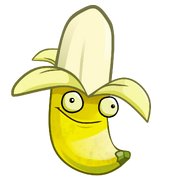 Time to Shine being played on Banana Launcher

Banana Launcher with the

Textures
Add a photo to this gallery

Retrieved from "https://plantsvszombies.fandom.com/wiki/Banana_Launcher_(PvZH)?oldid=2361452"
Community content is available under CC-BY-SA unless otherwise noted.