I need my TIME MACHINE!
Banana Dancer is a conjectural name for this article.
If you know the official name or have a better name or
translation for it, please contact a wiki administrator to change it.

For the version in Plants vs. Zombies Online with a similar appearance, see Banana Tree.

Can push zombies back to the last tile.

In preparation for the 5th Anniversary celebration. The organizers specially invited the most popular dancer in all of the plant kingdom, Banana Dancer, as a special guest to attend. Although Banana Dancer is a superstar in the plant world, she is very fond of charity work. She decided to donate all the money made from her appearance to charities. This received unanimous praise from the outside world. And this plantain will bring her new traditional fan dance. The traffic of this topic instantly reached the number one spot on social media. If you want to see her dance at the scene, please be sure to grab a ticket on time!

Banana Dancer (芭蕉舞蹈家 pinyin: bājiāo wǔdǎo jiā) is a plant in the Chinese version of Plants vs. Zombies 2 introduced in the 2.3.1 update. She shoots tornadoes that deal 800 damage to zombies.

She has a chance to shoot a tornado that deals only 100 damage, but can push a zombie to the ninth column.

She is based on a plant in Plants vs. Zombies Online with a similar appearance, Banana Tree, who in turn is based on the Musa basjoo tree, more commonly known as the "Japanese banana", a banana tree originating from southern China that is commonly cultivated in parts of Japan for its plant fibers.

When fed Plant Food, she will shoot a large tornado that when after hitting a zombie, will attract nearby zombies in its lane, dealing damage.

It is similar to its normal effect, but the tornado will have two smaller tornadoes circling it. Up to two zombies will be stuck in those small tornadoes, being stunned, dealt damage to and the large tornado will not stop if the smaller ones catch zombies.

Since this plant is expensive, place her near the left side of the lawn to prevent her from being eaten. Although she is strong, she only targets one zombie at a time with a very slow rate of fire, so pair her with plants with splash damage like Snapdragon or else she will be quickly overwhelmed.

It is not recommended to use this plant as your main offensive plant due to her high cost and reload time. 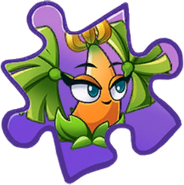 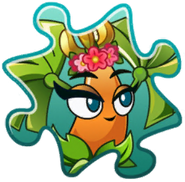 Getting Banana Dancer Puzzle Pieces in the 5 Year Anniversary Event. 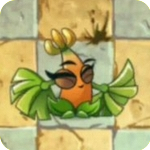 Puzzle piece texture
Add a photo to this gallery

Retrieved from "https://plantsvszombies.fandom.com/wiki/Banana_Dancer?oldid=2337263"
Community content is available under CC-BY-SA unless otherwise noted.