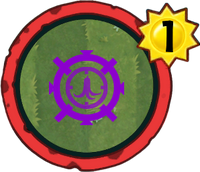 Do 2 damage to a Zombie.
Beware fruity vengeance from above.
Banana Bomb is a galactic uncommon plant trick card in Plants vs. Zombies Heroes and a member of the

to play, and its ability does 2 damage to a selected zombie on the field. Its closest zombie counterpart is Bungee Plumber.

It's based on Banana Launcher's target and projectile from Plants vs. Zombies 2.

Beware fruity vengeance from above.

Banana Bomb is essentially a cheaper and more convenient Berry Blast for zombies on the field, although slightly weaker. The cheap cost of 1 is great, and allows several Banana Bombs to be easily thrown out in the same turn, with potential devastation to weaken and even destroy zombies. It can also be used as a cheap way to activate Re-Peat Moss' ability, although only Captain Combustible can use this combo normally.

While Banana Bomb can easily be played to pack a punch on pretty much any zombie (aside from shielded ones and Knight of the Living Dead), it is best played against glass cannons like Pool Shark, Mini-Ninja, or Snorkel Zombie. Generally, it is particularly good against the

Sneaky classes, as many zombies in them have low health, and the two classes themselves lack ways to boost their zombies' health.

However, its main weakness is that like Sizzle, it can only hit zombies, meaning it is unable to hurt or finish off your opponent.

Essentially, treat this card as you would a weaker version of Sizzle. If you suspect that your opponent has this in their hand or you see Banana Launcher activating his ability, try not to play low-health zombies such as Toxic Waste Imp or Zookeeper. If you need to play them, at least boost them so they won't go down.

However, there are certain zombies and combinations that prevent your opponent from playing Banana Bomb. For starters, Gravestone zombies cannot be harmed by it while in their gravestones. Shielding your zombies with Zombie Coach or Escape through Time (as Zombot Battlecruiser 5000 is too expensive just to block off some Banana Bombs), or giving your zombies

Untrickable via Parasol Zombie (who is also immune to Banana Bomb herself) is also recommended. Knight of the Living Dead is also an example. As for discouraging your opponent, Defensive End should do. 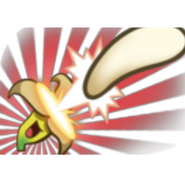 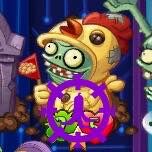 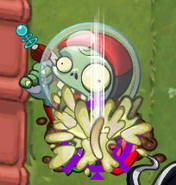 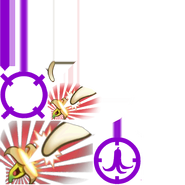