Plant Evolution: Draw two cards.
Only among the hyper-evolved Plants of Hollow Earth can you be outwitted by a tree.
Bamboozle is a colossal rare plant card in Plants vs. Zombies Heroes and a member of the

. It does not have any traits, and its Plant Evolution ability draws two cards.

It is based on bamboo, a type of evergreen perennial flowering plant in the subfamily Bambusoideae of the grass family Poaceae.

Its name is based on the real meaning of bamboozle, which is "to cheat or fool." It is also a pun on how Bamboozle has "bamboo" in it, the real-life plant it is based on.

Its description is a reference to its name and ability.

Only among the hyper-evolved Plants of Hollow Earth can you be outwitted by a tree.

Bamboozle is a slightly below-average plant, with 5

. Other than being a decently strong plant, it has no real outstanding features by itself.

The primary feature of this plant is its Evolution ability which allows you to draw two cards, which in a way makes it quite useful as a fighter that basically has Flourish attached to it. This can also be used with Dino-Roar cards like Tricarrotops to activate their abilities.

Since it requires a plant to Evolve, it is suggested to use play it on a weak or used-up plant, providing more firepower on whatever lane it is now on. Recommended plants include Amphibious plants like Sting Bean, as Bamboozle can strengthen your aquatic defense, which the Mega-Grow class itself isn't very good at, or Team-Up plants like Lil' Buddy to enhance firepower on a lane with an already powerful plant on it. This may also catch your opponent off guard as you can easily play it on top a weak plant that your opponent may have been ignoring, or right on this turn if your deck contains Puff-Shroom or Lil' Buddy.

Because of its root tribe, it can get a minor boost from Starch-Lord when played or Evolved on another plant that isn't Starch-Lord, although this is only normally possible as Grass Knuckles. Its leafy synergy, on the other hand, isn't really something to boast, as Bamboozle is too expensive to even consider for Savage Spinach's Evolution.

However, Bamboozle's real role is limited to late-game card draw, as its stats are only average as mentioned before (although they are still decent), and there are better plants if you boost them to Bamboozle's level (unless you don't have boosting cards). Regardless of stats, Bamboozle should not be your main source of card draw due to its cost, and you are better off using Flourish or Party Thyme if you want to draw more cards more reliably.

If your opponent wants to Evolve it to draw two cards, there really isn't much you can do other than trying to clear the field of any plants. Quickdraw Con Man can be used to dissuade your opponent from Evolving Bamboozle, especially if they are at low health. Otherwise, prioritize weaker plants to leave your opponent with no choice but to play it on their stronger plants. Otherwise, Bamboozle should be treated as a 5

plant and be dealt with quickly. Cut Down to Size and Rocket Science are two effective ways to do this. 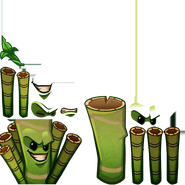 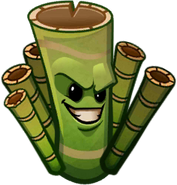 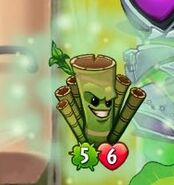 Evolved Bamboozle on the field

Evolved Bamboozle about to attack

Unevolved Bamboozle with the