Bamboom was a plant in Plants vs. Zombies Adventures. The player gained access to Bambooms after completing level 7 in Grey Matter Gardens. Bamboom was the VIP version of Bamboo Shoot. Bamboom was the last unlockable VIP plant. It shot spiked bombs to attack zombies.

It was the most damaging non-instant-kill plant in the game, which had enough power to defeat a Conehead Zombie or any zombie weaker than it with just a single hit. It was also able to defeat a Gargantuar Zombie in 9 or 10 hits.

Like Bamboo Shoot, Bamboom is based on the bamboo, an evergreen perennial flowering plant in the subfamily Bambuseae of the grass family Poaceae.  He is also based on a military soldier due to his military camouflage and possibly John Rambo due to his bandana.

His name is a portmanteau of "bamboo," the plant it is based on; and "boom," referring to his explosive projectiles. 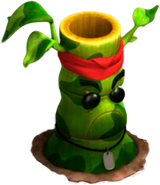 The player got the Bamboom

A Bamboom's spike bomb up close 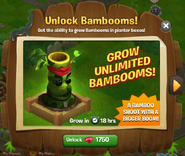 Concept Bamboom and its non-VIP counterpart