Has increased damage
Spin Dashes every 7 seconds
Bam-Bam-Boo is a Plant Battle Leader in Plants vs. Zombies: Battle for Neighborville who resembles a Citron wearing the "Pand-Orange" Costume. His zombie counterpart is Charnado.

Bam-Bam-Boo's name is a portmanteau of the onomatopoeia "Bam Bam," referencing the mounted Juice Cannon, and "bamboo," an evergreen perennial plant that is the main source of food for the Giant Panda, the animal Bam-Bam-Boo outwardly resembles.

Unlike normal Citron enemies, Bam-Bam-Boo has a much more aggressive AI which will use Spin Dash every few seconds, something not observed in other Citron AI enemies. Also, Bam-Bam-Boo appears to have a damage buff as hinted by the ever present "up arrow" aura found in other damage boosted characters.

Try to use the more mobile characters such as the Scientist or Engineer to avoid getting hit by the Spin Dash, which makes for a much easier take-down. Space Station can also be useful in the event that Bam-Bam-Boo should activate the Peel Shield, as the Crater Maker can easily penetrate through it. 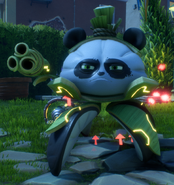