For other purposes, see Balloon Zombie.

Balloon Zombie is a Park Zombie in Plants vs. Zombies 3, first encountered on Floor 3 of Devour Tower. When he appears, he will fly above the ground, avoiding any plant he encounters. When his balloon is popped, he will walk normally.

Balloon Zombie based on the zombie with the same name and appearance in the original game and its sequel. However, both his appearance and ability resemble those from the sequel.

Any lobber plant should be able to take care of the balloon and bring the zombie down. However, Flak Seed specializes at this as she prioritizes Flying Zombies, lobs more seeds than usual, and said seeds deal extra damage to them. Cabbage-Pult also does well against Balloon Zombie, as Cabbage-Pult's Chilling damage type is strong against Balloon Zombie's. Cherry Bomb can destroy both the balloon and the zombie instantly. 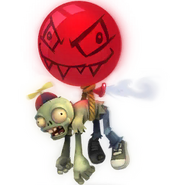