Transform every Zombie into random Zombies that cost 5

or more.
Sometimes a full moon turns bad dreams into horrible nightmares.
Bad Moon Rising is an event zombie card in Plants vs. Zombies Heroes and a member of the

to play, and its ability transforms all zombies on the field into random zombies that cost 5

or more, including another copy of them if they cost 5

It was added in update 1.16.10, along with Forget-Me-Nuts, Atomic Bombegranate, Thinking Cap, Kitchen Sink Zombie, Zombology Teacher, and Imp-Throwing Imp.

Its name comes from the song Bad Moon Rising by Creedence Clearwater Revival. The song had been used previously in the series in a trailer for Plants vs. Zombies: Garden Warfare 2 featuring Moon Base Z.

It could also reference Werewolves in general, who can turn into a stronger version of itself in a full moon. It could also be a reference to the Blood Moon event in the game Terraria, where the enemy spawn rate is greatly increased and more dangerous enemies may spawn.

This is an incredibly powerful, yet risky, trick, as it will turn all of your zombies into very powerful zombies. Make sure to have lots of cheap, disposable zombies to make full use of this trick like Swabbies or Goats. However, keep in mind that if you already have some expensive zombies on the field, this trick may end up making them weaker. Nevertheless, you can end up getting powerful zombies like Zombot 1000, Octo Zombie, or Zombot Plank Walker, so this trick is definitely worth it in most situations.

Be careful if you are facing a

Guardian hero because Mixed-Up Gravedigger can be made from this trick, and your opponent can simply play Grave Buster or Blockbuster and take out one or more of your powerful zombies. It can also make relatively weak zombies whose abilities are worthless in the Zombie Tricks phase, such as Ra Zombie.

Since this trick affects all zombies on the field, it works well with any zombie hero that can play or make many zombies at once. An example would be Professor Brainstorm, who has access to cards that make other zombies like Disco Zombie and Disco-Tron 3000. Since Super Brainz and Huge-Gigantacus also lead the

Sneaky class, they can swarm Imps to improve this trick's efficiency. They can even play Mixed-Up Gravedigger to prevent all of your zombies from being destroyed by protecting them until you can play Bad Moon Rising with the exception of Grave Buster, Blockbuster, and Cool Bean paired with Winter Squash.

With Huge-Gigantacus or Super Brainz, you can ramp up to a Bad Moon Rising by playing 3 Brain Vendors, Mixed-Up Gravedigger to re-use their ability during tricks and , therefore, allowing you to play your Bad Moon Rising up to 2 turns earlier.

You can pair this with Zombology Teacher to make this trick cheaper, though only Rustbolt can use her normally. Additionally, you can ramp up this card quickly using cards such as Cryo-Brain, Gentleman Zombie, or Medulla Nebula which all

Brainy heroes have natural access to. Speaking of Medulla Nebula, you can play Brain Vendor on Medulla Nebula on turn 4 to easily play Bad Moon Rising very early, or on turn 3 if Flag Zombie or Terror-Former 10,000 is played before that.

This trick can also be used to completely nullify the impact of The Great Zucchini, turning all your weak 1

zombies into highly dangerous zombies. The turn order ensures that the newly transformed Zombies won't be bothered again before going into the Fight phase.

If your opponent is a

Brainy hero and you see them saving 7 brains, there is a high chance that they will most likely be playing this trick. Try to remove as many zombies as possible so this trick has fewer powerful zombies to work with. As a last resort, use Brainana to prevent them from playing this for a turn, or Forget-Me-Nuts or Dark Matter Dragonfruit to increase the cost of this trick.

Doom-Shroom is handy for taking out most of the transformed zombies. However, you will not be able to react to it the turn it is played. Therefore, you can only prepare for the zombies that this trick will make since zombie tricks are played after plants are played. 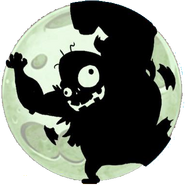 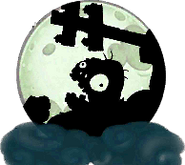 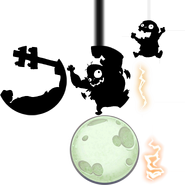 Bad Moon Rising being the featured card in the menu for the July 18th, 2017 Daily Challenge

Bad Moon Rising being the featured card in the menu for the July 22nd, 2017 Daily Challenge

Bad Moon Rising being the featured card in the menu for the August 3rd, 2017 Daily Challenge

Bad Moon Rising being the featured card in the menu for the August 7th, 2017 Daily Challenge

Bad Moon Rising on the advertisement for the Weekly Events 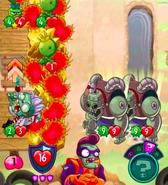 A lucky aftermath from a Bad Moon Rising, causing the 2 Zombot 1000s with Science to be affected by Gadget Scientist.