Getting a diamond, feeding Crazy Dave

Bacon is an item obtained after beating Level 3-4 in Adventure Mode on the Android and iOS versions of Plants vs. Zombies. It is a replacement for Crazy Dave's Car Key, as the shop is already open to buy mini-games before that level. On the Nintendo DSiWare version, it is a replacement for the Watering Can found on Level 5-4, due to the fact that the Zen Garden is not available in the game. In the iOS and Android versions, the bacon was originally obtainable on Level 5-4, but was moved when the Zen Garden was added in a later update.

Visually, it is a greasy strip of fried pork, which Crazy Dave will exchange for a diamond. This is similar to the taco, which is obtained in Level 4-4 on all versions and then also given to Crazy Dave for a diamond. When given the bacon, he will exclaim:

The bacon can also be unlocked in the shop after buying the ninth seed slot and it will cost $50. When it is clicked on, a message will appear saying: "It won't help against the zombies, but everyone loves bacon!" After the first purchase, the bacon's cost will be raised to $500. Then a new message will appear when the player taps on the bacon, and it will say: "Mmmmmmm... Delicious!" When bought, Crazy Dave's eyes get very big and he will also say "Mmmmmmm... Delicious!" Purchasing it after that will yield no reward for the player as it is just a clever way to lure them out of $500. Therefore, it is highly recommended to not purchase bacon. However, if you are an experienced player and have nothing else to spend your coins on besides the Garden Rake, you might consider buying the Bacon just for the reaction. 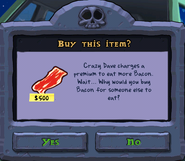 Receiving the bacon in the iPad version