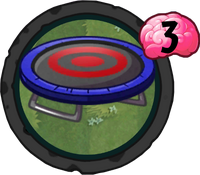 Bounce a Plant.
Zombies love trampolines. Not everyone knows that.
Backyard Bounce is a premium uncommon zombie trick card in Plants vs. Zombies Heroes and a member of the

to play, and its ability gives a selected plant the Bounce effect. Its plant counterpart is Spring Bean.

It is based on a trampoline, a device consisting of a piece of strong fabric using many coiled springs, mainly used for recreational and competitive purposes.

Zombies love trampolines. Not every one knows that.

Backyard Bounce should be used the same way as Spring Bean, used mainly for plants that become too strong for you to control, or one blocking a zombie that could land a heavy or finishing blow on your opponent.

less and won't be affected by Grave Buster. However, since it is a trick, it can be affected by Forget-Me-Nuts and Dark Matter Dragonfruit, which both increase its cost, as well as Brainana which prevents it from being played completely for one turn. Not to mention, Black-Eyed Pea and Sportacus can take advantage of it as well. Additionally, Pogo Bouncer can be used with Mixed-Up Gravedigger to reactivate its ability and Bounce another plant, so you should decide which card fits in your strategy better.

Backyard Bounce is not a reliable card in comparison to most other zombie tricks such as Rocket Science, Rolling Stone or Locust Swarm. This is because they can completely remove the targeted card from your opponent's deck, while this trick can't. An edge this card has over most instant-kill cards, however, is that it can affect all plants regardless of stats (excluding

Untrickable plants). The opponent also has to spend their sun again if they wish to replay the plant, which can put them at a disadvantage, especially if they boosted that plant, as it also resets its stats.

Since it is part of the Sneaky class, you can combine this trick with

Bouncing plants that have "When played" abilities such as Sour Grapes, Bluesberry, and Jumping Bean is not recommended, as your opponent gets another chance to play them. In addition, unlike Spring Bean, this trick has no tribe synergy at all, aside from being Conjurable by Cosmic Sports Star.

Jelly Bean should be a big threat to this trick, as it will recieve a boost once it Bounces a plant. However, you can bounce Jelly Bean first

If you see the zombie hero saving 3 or more brains after they play zombies, there is a chance they may be planning to play this trick. Do not play or boost a single plant, as this trick will completely waste your sun and cards if you do. You can also play plants with "When played" abilities to deter your opponent from playing this trick.

The best way to counter this trick is by having Jelly Bean on the field, as it get a boost once it Bounces a plant. 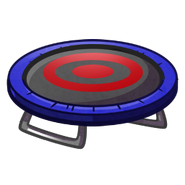 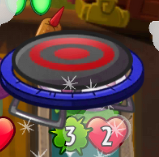 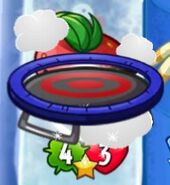 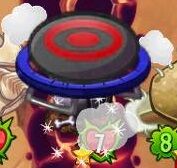