watch 03:31
Plants Vs. Zombies Garden Warfare 2 Backyard Battleground Gameplay Reveal
Do you like this video? 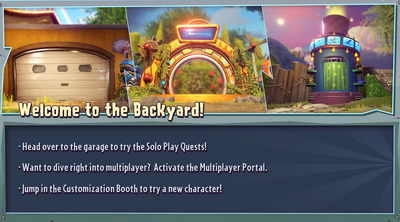 Backyard Battleground is the hub area in Plants vs. Zombies: Garden Warfare 2 where the player can do quests to level up with the new ranking system, join up with friends, enter game modes and mission portals, and buy sticker packs. This is also where the player was able to transfer the characters they unlocked from Garden Warfare, as well as their abilities, which is no longer available as of February 28, 2017. It is essentially a "hub world" from which all other modes and activities can be accessed.

Welcome to your very own Plants vs. Zombies playground. In your Backyard Battleground you can edit your character’s abilities and customizations, choose quests, jump into co-op or multiplayer action modes, or invite up to 3 friends in to your backyard to start a party and take on AI – defeat a wave, and a more powerful wave will show up. You can also switch teams to challenge your friends! Backyard Battleground is your own frontline base to plan your attack before you enter the battle for Zomburbia.

Plants on one side, Zombies on the other. Creating a stalemate of epic proportions, where neither side has been able to gain the advantage.

In the middle of the Backyard Battleground, there is a flagpole, which the player can raise to start an attack against the other faction. The opposite faction will try to attack you and the flagpole, and powerful waves will keep coming, with each wave stronger than the last. This is a good way for the player to earn coins and XP. In the middle of the bases (either in the giant tree or in Zomboss' mansion), the player can view a stats board, in which they can see their cool stats, which they can view their Most Vanquishes, Most Time Played, Highest Streak, Most Assists, Most Heals, Most Revives, etc. They can view their Stickerbook, and can also upgrade their character classes and variants via small bobbleheads of them. Upgrading a character will change their XP bar and their plaque when the character vanquishes a player, ranking from beginner to bronze, silver, gold, gem, and crystal. Out back, the player can enter one to three portals, in which the player can play a story mode, go to places only known by esteemed L.E.A.F. agents or top zombies, and other cool things, too.

Each faction's base contains various facilities which serve the role of the main menu.

The player can see the latest news and announcements. The player formerly had the ability to import the character variants and abilities unlocked in Garden Warfare. The player could also obtain the loyalty rewards from the mailbox.

Activating the two TVs vertically stacking will initiate the Split Screen multiplayer. Each player can use his or her own account and can earn XP independently from his or her partner. If the second player doesn't have an account, they can play as a guest, but they can't progress (they can't earn coins or XP) until they get a proper account.

This device is used for entering all game modes except Garden Ops, Graveyard Ops, Infinity Time, and modes that take place in Backyard Battleground (Flag of Power, Crazy Targets, Soccer Pitch, etc.). The player can either find a multiplayer match to play with players around the world (or in their region due to the Region Settings), they can set up a private match to play with friends against AI or the player can play a mode solo against AI.

The Quest Board contains various daily quests. The player will be rewarded with coins, stars and XP multipliers when quests are completed. Occasionally there will be special quests called Epic Quests. They are more challenging quests but they offer bigger rewards than normal quests.

This device allows the player to change the difficulty of the backyard's AI enemies, invite the player's friends to initiate a multiplayer session of Backyard Battleground and also manually save your game.

Crazy Dave's flying RV and Dr. Zomboss' blimp are used to enter their side's respective Ops mode. The player can either create or join a multiplayer match, set up a private Ops match to play with friends or they can go in solo in the new Solo Ops mode.

Entering the Character Customization booth will allow the player to switch between factions, switch characters, and customize their appearances, abilities, gestures, and upgrades. This booth can also be entered from anywhere by selecting "Respawn" from the pause menu.

Each base has a recruitment poster of the opposite faction. Interacting with one will teleport the player to the other faction's base and the player will respawn as the plant or zombie they were last. Note that the player can also switch between factions from the Character Customization booth.

The player can spend the coins they earn to buy sticker packs which contain reinforcements, character customizations, and character variants.

The player can see all unlocked plants and plant variants, zombies and zombie variants, accessories, abilities, gestures, player statistics, and Spawnable Plants and Zombies inside of it, plus the description of them.

The player can either go in the giant tree or Zomboss' mansion (depending on which faction you are) and will allow the players to see unlocked characters' individual stats, in the form of small bobbleheads. If a character reaches level 10 it can be promoted here. Promoting a character will grant the player 20,000 coins. In the middle of the room is the Stickerbook and a large stats board which shows the character who has the Most Vanquishes, Most Time Played, Highest Streak, Most First Strikes, Most Post-Vanquish Taunts, Most Healing, Most Revives and Most Assists.

Around the map, there are chests the player can open. When opened, these chests grant the player loot. However, the player requires stars from quests to open them up. Some chests contain coins while others contain Backyard customization items, which can be used to customize either side's base and also the giant statue near the dock.

In many parts of the map, the player can play solo story quests, either for the Plants or Zombies. The quests reward the player with coins, special customizations and are also good fun to do.

Infinity Time is a secret game mode that unlocked when all Story Quests of each faction is completed. In this mode, the players control Infinite Robots to destroy as many Gnomes as possible. Gnomes drop Time Shards which heal the player when collected, and they can also be traded for rewards at the end of the game.

Around the Backyard there are many missions available for the player to take part in, which vary from fighting enemies, finding friends and shooting gnome targets.

In front of the Town Hall, there is the Progress-O-Meter, released in the Trouble in Zombopolis: Part Two DLC. Its purpose is to keep track of how well the community is doing in the Community Challenges that occur weekly. As the community completes the challenge, the gauge on the meter will fill up. Once it fills up past a goal, the bell on it will ring, fireworks will go off and a chest on it will open, giving a reward to the players for passing a goal.

Inside the Town Hall, there is the Mystery Portal, which was added in the Trials of Gnomus DLC. When you enter the portal you will be able to play one of three limited-time game modes, either being Super Mix Mode, Cats vs. Dinos or Boss Hunt. The Town Hall opens every Thursday and closes every Monday, giving the player plenty of time to play the game mode. Also, playing the game modes inside the Mystery Portal will reward the player with Rainbow Stars, which the player can use to open the Rainbow Chests in the Town Hall, which gives the player classic gestures, community and classic customizations and a chance of a Trial Key to access one of the Trials of Eternity.

Rux's Bazaar is a shop that was added in the Trials of Gnomus DLC. It is located in the sewers and is run by a rich and mysterious gnome called Rux. The shop only opens once or twice a month and stays open for three days before it closes. Rux will sell the player random customization items that they can buy with coins. Rux can sell Rare and Super Rare items which cost 10,000 to 50,000 coins, at least one Special item which costs 250,000 coins and either a Legendary or an exclusive ability (which is only available through Rux) for 500,000 coins.

The secret area can be accessed through the pipes around the Backyard. They are all connected to a large sewer system, where the player can find the Crazy Targets range, a fish that trades Stars for XP and lots of loot.

There is a subway railway in there.

In Flag of Power, the player fights against hordes of AI enemies to protect the flag. The player must stay in a large ring around the flagpole to ensure the flag stays up. This mode is endless and doesn't end until the flag is dropped by the enemies. In the Beta, When the flag is lowered, the remaining AI must be defeated by the player until no more AI is left. In the final release, an explosion occurs if the flag is lowered, instantly vanquishing any AI left.

In this mode, the player tries to shoot down all targets as fast as possible. The player can post their best times to the online leaderboard and can compare their records against other players. Crazy Targets needs five stars to open up.

On the right side of the plant's base, there is a large soccer pitch. Players in the hub can play soccer by pressing the button in the pitch to start a match. A soccer ball will spawn in the center of the pitch, and plants and zombies can either shoot or push the soccer ball to move it. The goal is to get the soccer ball into the opposing team's goal, while the opposing team tries to do the same. The scores are tallied on a large scoreboard, and some Weeds and Browncoat Zombies will appear on the stands and cheer the teams on. If a player shoots someone in the crowd, the entire crowd will come off the stands and start to attack the players in a similar manner to a real-life pitch invasion.

Golden Gnome targets given double points while Blue Gnome targets freeze time for about two seconds. There is a leaderboard for this game.

AI-controlled plants and zombies (Weeds and Browncoats initially) spawn throughout Backyard Battleground on their respective side of the map. In the middle of the map, there exists a "no man's land" zone where AI plants and zombies will attack and vanquish each other in an endlessly repeating cycle of spawning, vanquishing and respawning.

The player can freely intervene in the fighting and turn the tables into to their team's favor by defeating the opposing team's AI members, however doing so will cause the fighting to gradually increase in severity until it finally escalates into an all-out mass assault with everything from basic foot soldiers to bosses being involved. But the Bosses only focus on the player.

As the player scores more vanquishes, the fighting escalates according to the following steps, with both sides being affected:

AI champions start spawning, usually one at a time. In addition to those, a maximum of three different AI heroes can also be present on the map.

AI bosses will start appearing, initially only one appears but if the player attacks or defeats it, more will spawn. Friendly bosses will also spawn to combat the opposing team's bosses, usually resulting in dual-sided boss fights.

Retrieved from "https://plantsvszombies.fandom.com/wiki/Backyard_Battleground?oldid=2346449"
Community content is available under CC-BY-SA unless otherwise noted.