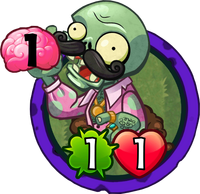 For the other uses, see Backup Dancer (disambiguation).

None
Spent six years perfecting his art at the Chewliard School for the Performing Arts.
Backup Dancer is a basic common zombie card in Plants vs. Zombies Heroes and a member of the

Crazy class. He can also be made by Disco Zombie or Dance Off. He costs 1

He is the basic zombie of the Crazy class.

He is based on the zombie in Plants vs. Zombies with the same name and appearance, as well as a similar description.

Spent six years perfecting his art at the Chewliard School for the Performing Arts.

zombie, Backup Dancer usually does not survive for long. However, Aerobics Instructor can turn him into basically a Disco Zombie without his ability if he manages to survive, while spamming Backup Dancers is a cheap way for Flamenco Zombie and Headhunter to hurt your opponent for quite a lot. But even then, Backup Dancer is still left with 1 health unless a health-boosting trick like Monster Mash, Healthy Treat, or Camel Crossing is played, which isn't worth playing unless there are other zombies on the field (especially Healthy Treat). Using Final Mission on him is a good choice to make room, especially if he was made by Disco Zombie or Disco-Tron 3000.

Since Backup Dancer is also a mustache zombie, he can be used by Professor Brainstorm to activate Mustache Waxer's ability or be used to Evolve Duckstache. However, Backup Dancer should not be put in a deck for that purpose, and other Mustache Waxers are better for mustache synergy.

Because of his dancing tribe, you should watch out if your opponent suddenly fills the lanes with Backup Dancers, because it is only a matter of time until Flamenco Zombie or Aerobics Instructor comes into play. However, it should not be hard to deal with them, since they only have 1

unless Aerobics Instructor boosts them. But even then, Sour Grapes can still easily wipe all of them out. However, there is nothing you can do if your opponent gets a Headhunter out on the field, as his ability takes effect instantly.