These zombies appear in sets of four whenever Dancing Zombie rocks out.

Backup Dancer is the tenth zombie encountered in Adventure Mode and only appear in groups when summoned by Dancing Zombies and the second transformation of Skeleton Demon Zombie. They appear in sets of three or four, surrounding a Dancing Zombie with one on each side while showered by disco lights. Before complaints were made by the Michael Jackson estate, the Backup Dancers and Dancing Zombie used to be a reference to the song (and its zombie-themed music video) Thriller.

These zombies appear in sets of four whenever Dancing Zombie rocks out.

Kill or hypnotize the controlling Dancing Zombie or Skeleton Demon Zombie or it will continue to summon an unlimited number of Backup Dancers when any of them die. Hypnotizing it will get you the achievement Walk This Way, Disco is Undead, or Thrilling the Zombies. Alternatively, plant a Wall-nut in front of the hindmost one or freeze one because when one stops or is slowed, since the rest are forced to follow suit.

Early on, Fume-shrooms are a good idea against them. If you beat Adventure Mode, you can also use the Melon-pult, Squash, or Winter Melon.

Another strategy is to ricochet a Wall-nut off of the front Backup Dancer, after which it will usually ricochet off one of the side Backup Dancers (and possibly hit the back one too) and immediately follow the first Wall-nut with another to take out the Dancing Zombie while it is unprotected.

Otherwise, if it is too urgent, you can use a Giant Wall-nut to kill both them and the Dancing Zombie, even though not all of the Backup Dancers will be killed. You can plant an Explode-o-nut to the top or bottom Backup Dancer to kill four of the five.

Placing the Dancing Zombie in the middle lane can help get brains 2, 3, and 4, in addition to dealing with threats with faster zombies (if needed) that are vital to part of your success. In ZomBoogie, they are also the most helpful zombie. Only use them in the middle rows (2, 3, and 4) where they are most effective, and try not to get the Dancing Zombies killed. The best way is to start with row 2 or 4, and then do it on the other. In I, Zombie Endless, if you place a Dancing Zombie in a row with no plants, it can't die (unless there is a Starfruit or Threepeater protecting the row) and will keep summoning Backup Dancers and get the brains easily.

A Backup Dancer without one arm 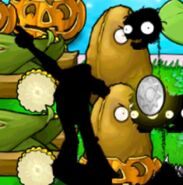 Ashes of a headless Backup Dancer

HD Backup Dancer
Add a photo to this gallery

Backup Dancer without its arm

Backup Dancer in Java version
Add a photo to this gallery

Retrieved from "https://plantsvszombies.fandom.com/wiki/Backup_Dancer?oldid=2238486"
Community content is available under CC-BY-SA unless otherwise noted.