Rare
BBQ Corn is one spicy customer. The only thing he takes more seriously than grilling is protecting his fellow Plants. Good thing then, that the sound of crinkling aluminium foil drives Zombies crazy.
BBQ Corn is the Rare fire variant of Kernel Corn in Plants vs. Zombies: Garden Warfare 2. The BBQ Corn looks like the original Kernel Corn, except his corn cobs are more orange in color and they have visible flames emanating from them like all fire-based plants. A large portion of his body is covered in aluminum foil stained with barbecue sauce. The BBQ Corn also wears a checkered bandanna and he has pastry brushes for feet which are also stained with barbecue sauce. He was first revealed in the gameplay of the September 2015 developer diary, and later previewed in a short gameplay of the Backyard Battleground.

"BBQ Corn is one spicy customer. The only thing he takes more seriously than grilling is protecting his fellow Plants. Good thing then, that the sound of crinkling aluminium foil drives Zombies crazy."

The BBQ Corn's primary weapon is comparable to the Fire Flower's Flame Pulse, possessing identical clip size and damage. The only thing that is different between the two plants is that the BBQ Corn is not as agile as the Fire Flower (in exchange for slightly higher health) and he does not possess the Fire Flower's self-healing power (in exchange for having more damaging abilities). As such, the BBQ Corn is ideal for attacking large hordes of zombies. A player using the BBQ Corn can keep switching between multiple targets to keep them on fire and let the fire effect chip away at their health while steadily wearing them down. As such, the BBQ Corn is also useful in Herbal Assault for harassing the zombies defending the objective and overall weakening their defense.

Get to a vantage point or an otherwise good position, take potshots and jump in and out of cover to repeatedly ignite the zombies and let the fire damage wear them down. The BBQ Corn can be useful for putting up pressure on Scientists that are trying to heal their allies since if you keep on igniting the zombies and spread out your damage to the entire zombie team, the Scientists might end up with more injured zombies than what they can heal. To maximize the effect, destroy all sources of healing (Zombie Heal Station and Dr. Heals) from a range. If you can do this, the zombies will eventually fall to the fire damage, or at the very least, you will get numerous assists for your efforts. 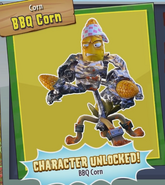 BBQ Corn in the Stickerbook

Mastered version of the bobble-head

BBQ on the Fire Plants Pack