Destroy a random Plant.
Just wait until you C-Sharp.
B-flat is a premium uncommon zombie trick card in Plants vs. Zombies Heroes and a member of the

to play, and its ability instantly destroys a random plant on the field.

It is based on Pianist Zombie's piano in Plants vs. Zombies 2 without the tip jar and broken lid.

Its name is a pun on the musical note "B-flat" (B♭). It is pronounced "be flat," which describes its ability to flatten, i.e. destroy a plant.

Just wait until you C-Sharp.

While potentially useful as a tool to destroy tough plants, B-flat should never be considered a reliable choice to do so. Since its target is randomized, the player is not likely going to be able to destroy the right plant unless there is only one on the field. In most cases, it would be better off using a Locust Swarm instead, which costs 1

more but allows the player to choose the target.

Locust Swarm has better synergy than B-flat too, as it can boost Zookeeper and Cat Lady, while B-flat can only benefit Headhunter as the other two synergy cards, Aerobics Instructor and Flamenco Zombie, only interact with zombies, and even then, it is only limited to Electric Boogaloo.

If there is only one plant on the field, then this will guarantee that it will be destroyed. Due to this, it is best to use other cards that can remove as many plants as possible like Bungee Plumber, Nibble, or Final Mission to improve B-flat's chances to destroying the desired plant for 1

You can also use Area of Effect cards such as Fireworks Zombie or Weed Spray to destroy some of the plant fighters, especially weak plants that swarm the field, giving B-flat an increased chance to destroy a specific plant.

There are more circumstances that any Beastly hero may not use it due to its low utility compared to cards like Locust Swarm or Alien Ooze, but if you do see that a Beastly hero uses B-flat, you should play more small plants so it may prevent a strong plant from being destroyed as its ability is random. 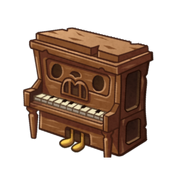 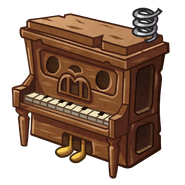 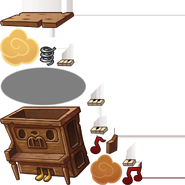 B-flat on the advertisement for the Feel the Beat Pack

B-flat on the advertisement for the Electric Boogaloo Hero pack 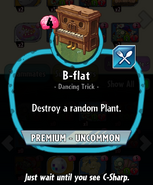 B-flat on the advertisement for the Electric Boogaloo Ally Pack 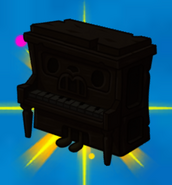