Can use ninja stars to deal damage to zombies in its arc attack range.

Usage: Can use ninja stars to deal damage to zombies in its arc attack range.

Flying zombies (shurikens can not hit them)

He has received training in traditional ninjutsu since childhood, is hailed as a genius who is only encountered once in a millennium in the ninja community, proficient in all kinds of ninjutsu, and was also chosen by the ninja king himself to be their successor, but he is not happy, because he lost to Bonk Choy once, and he thinks that he is not invincible if he does not defeat Bonk Choy, and he has dwelt on that ever since.

Auberninja  (茄子忍者: pinyin: qiézi rěnzhě) is a plant in the Chinese version of Plants vs. Zombies 2 introduced in the 2.2.8 update.

He attacks by throwing shurikens at zombies in an arc pattern, hitting all targets in his lane twice, once it moves forward and once it returns.

Auberninja's design is based on the Solanum melongena, also known as the eggplant (in US and Australia), and a ninja, a covert agent or mercenary in feudal Japan.

His name is derived from "aubergine," an alternative name for "eggplant" (in British English, French, German, and Dutch), and "ninja."

His costume, a ninja headband, is a reference to the Naruto series.

When fed with Plant Food, Auberninja will throw five regular shurikens into all five lanes on the lawn.

When fed with Plant Food while costumed, Auberninja will now throw five gold shurikens instead, which stun zombies and are more effective. 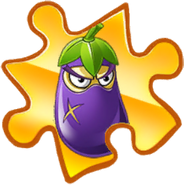 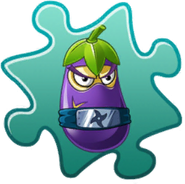 Retrieved from "https://plantsvszombies.fandom.com/wiki/Auberninja?oldid=2372966"
Community content is available under CC-BY-SA unless otherwise noted.