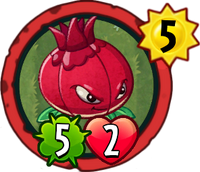 For a similar plant in Plants vs. Zombies 2, see Bombegranate.

When destroyed: Make Seedlings next door.
Remember: Never ever EVER split a fruit. Oh, hold on, actually fruits are ok, just never split an atom.
Atomic Bombegranate is an event plant card in Plants vs. Zombies Heroes and a member of the

. It does not have any traits, and its ability makes a Seedling on each lane adjacent to it when it is destroyed, unless those lanes are either aquatic lanes or occupied by a non Team-Up plant.

It is based on the pomegranate, a fruit-bearing deciduous shrub or small tree. It might also be based on the plant, Bombegranate  in Plants vs. Zombies 2 with a similar name.

Its name is a portmanteau of "atomic bomb," referring to its bomb-like appearance, and "pomegranate," the real-life plant it is based on.

Its description references the dangers of splitting an atom.

Remember: Never ever EVER split a fruit. Oh, hold on, actually fruits are ok, just never split an atom.

This plant has low stats for its cost; it does hit fairly hard, but its low health means that it will be easily destroyed. However, Atomic Bombegranate makes up for it with its ability. The Seedlings it makes can turn into very powerful plants, including legendary cards such as Brainana, Three-Headed Chomper, and Bananasaurus Rex if you get lucky. But remember that this ability is luck-based in nature, so do not expect them every time you use this plant.

The Seedling on the left will be made on a lane where combat has already occurred, allowing it nearly guaranteed survival until the next turn when it will transform. The Seedling on the right, however, will have a harder time surviving the Fight! phase, so you may want to play a Team-Up plant there first. If necessary, the Seedling on the fight can function as a shield to block one attack.

Atomic Bombegranate's downside is that unless you have Team-Up plants, it requires three empty lanes to be fully functional, which means you will either have to settle for one Seedling or less, or risk leaving three lanes open to zombie attacks. This naturally makes it hard to use it with Muscle Sprout and Astro-Shroom too, as their ability activating thrice will not compensate for the sacrifice you made to do so.

Atomic Bombegranate itself is easy to destroy, as there will be many available options by turn 5. But doing so will not end the problem completely, as the Seedling made have the chance to turn into dangerous plants.

Beastly hero, as only these classes have access to instant-kills and damaging cards (including Total Eclipse).

Another way to deal with the Seedlings is to move this plant to the leftmost or the lane right next to the aquatic lane so that it will only make one Seedling upon destruction, making it one less Seedling to deal with before the start of next turn.

Or, you can Bounce this plant to prevent its ability from activating. Since your opponent will have left many lanes open for the future Seedlings, doing so can also potentially land lots of damage to them. 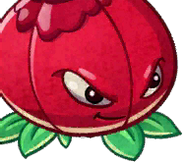 Atomic Bombegranate on the field
Add a photo to this gallery 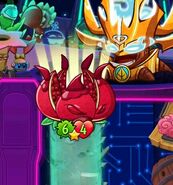 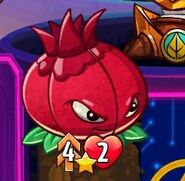 Atomic Bombegranate tinted gray due to a glitch

Two Atomic Bombegranates on a lane due to Pair Pearadise's ability

Time to Shine being played on Atomic Bombegranate

A notification about Atomic Bombegranate

Atomic Bombegranate on the advertisement for the Early Access Bundle

Atomic Bombegranate on the advertisement for the Early Access Bundle

Atomic Bombegranate being the featured card in the menu for the August 8th, 2017 Daily Challenge

Atomic Bombegranate being the featured card in the menu for the August 12nd, 2017 Daily Challenge

Atomic Bombegranate being the featured card in the menu for the August 24th, 2017 Daily Challenge

Atomic Bombegranate being the featured card in the menu for the August 28th, 2017 Daily Challenge
Add a photo to this gallery

Retrieved from "https://plantsvszombies.fandom.com/wiki/Atomic_Bombegranate?oldid=2344076"
Community content is available under CC-BY-SA unless otherwise noted.