The Astronaut Zombie claims that there is a secret Lunar Suburbia on the dark side of the moon - a place perfect for Zombie plundering. None of the other Zombies believe him.

His primary weapon is the Moon Rock Launcher, launching a single moon rock when fired. Due to this weapon being fully automatic, it fires at an ultra fast speed and has a significantly increased ammo capacity. It deals 17 impact damage and 19 critical damage long range or 18 impact damage and 22 critical damage short/mid range. The Moon Rock Launcher can be effective at mid-range, but its slow launch speed makes it difficult to hit moving targets. Therefore, the Astronaut has trouble taking down Garlic Drones. 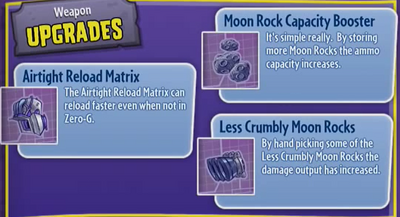 The Airtight Reload Matrix can reload faster even when not in Zero-G.

By hand picking some of the Less Crumbly Moon Rocks the damage output has increased.

This Scientist is one out of two that are able to reliably hit long range targets (the other one being the Paleontologist), making him ideal for players who prefer not to engage in close range combat. The projectile weapon nature of the Astronaut's primary weapon encourages players to stay away from close range combat and instead attack plants at mid and long range. He is particularly useful for taking down most variants with 100 health, such as the Sunflower variants (excluding Metal Petal), most Rose variants, Agent Pea and Hot Rod Chomper (unless he has a health upgrade). The ability to attack plants at long range without much damage fall-off gives this variant something that most Scientists do not have; the ability to fight back against, for example, a Cactus at long range.

The Astronaut is well-geared for mid range combat and is also hazardous at long range, its automatic firing (this is one of the three Scientists whose weapons are fully automatic, with others being the Zoologist and Dr. Chester) makes hitting moving targets easier but since the projectiles take some time to reach their destination, Garlic Drones and Artichoke Drones will in particular be hard to deal with since if the operator is skilled enough, he can dodge your shots while retaliating with little threat of being shot down. As such, leave drones to your teammates, if a drone starts chasing you exclusively, your best option might be to run away and hide (as shooting back is hard unless you are good at leading your shots), even if you cannot escape, you still have the option to fight back.

If you like to play it really defensively (by staying back and healing teammates while attempting to avoid combat altogether), this variant is good for that particular purpose since even if you try to stay out of harm's way, you can still help your team by attacking plants at long range. For maximum healing power, the following loadout is recommended:

This loadout gives you two ways to heal teammates as well as a method of getting out of bad situations but makes you unable to deal damage in any other way other than your primary weapon. 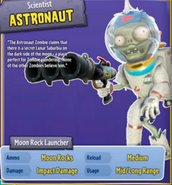 Astronauts, with the science channel hats, in the boss wave in Garden Ops, CRAZY mode.

A group of Astronauts on a boss wave in crazy mode Garden Ops.