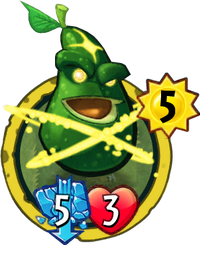 When destroyed: Gain an Astrocado Pit.
"Holy guacamole!"
Astrocado is a galactic legendary plant card in Plants vs. Zombies Heroes and a member of the

Strikethrough trait, and its ability adds an Astrocado Pit into the plant hero's hand when it is destroyed unless the plant hero has 10 cards in their hand already. Its closest counterpart is Octo Zombie.

It is based on the fruit of an avocado (Persea americana), a member of the flowering plant family Lauraceae.

Its name is a portmanteau of "astro-," referring to it being in the Galactic Gardens set, and "avocado," the real-life plant it is based on.

Its ability could be a reference to the Phoenix, a legendary bird that will rebirth into an egg upon death and hatch into a phoenix back again, with Astrocado Pit being the egg and Astrocado being the Phoenix.

Its description is literally the phrase "holy guacamole," which is what someone says when surprised or in shock or disbelief. This phrase may have been selected due to the word "guacamole," a dip made from avocados, being in it. Its old description (which is now Astrocado Pit's), included the phrase "the pits," which is a term used to describe the worst possible situation. It is also a reference to avocados having pits.

While Astrocado's stats are average to bad for a 5-sun legendary plant, its

Strikethrough trait allows it to give a good beating to your opponent hiding behind a tanky zombie. However, its ability is the real deal; even if your opponent succeeds in destroying it, it will return as a 1-sun plant that only needs a turn of survival to wreak havoc again. It can constantly regenerate itself practically indefinitely, making it a powerful addition to any deck.

Since its ability counts as Conjuring a card, you can also activate Dino-Roar abilities. However, you should not rely on it.

Each hero can use Astrocado in their own way:

However, note that Rocket Science and Cut Down to Size can destroy it easily, as well as damaging tricks like Zombot's Wrath. Even if it "resurrects," letting it fall easily is bad for you, as you will need to spend your resources just to bring it back.

Since it has only 5

, there are a few solutions for you to destroy it without getting hurt by it, such as Rocket Science, Zombot's Wrath, or a string of other tricks. You can also

Cards that are able to forcibly conjure cards for the plant hero are somehwat useful, if they hold too many cards. Examples include the Wormhole Gatekeeper and the Explosive Fruitcake. This will prevent the Astrocado Pit from being given to the plant hero when the plant is destroyed. However, one should not rely on this method.

If the Astrocado is played too late into the game, the Octo Zombie can counter him. Assuming that you've lured out your opponent's tricks that could move/destroy him, the Octo Zombie will destroy the Astrocado and potentially deal a lot of damage to the opponent, who will have to seriously reconsider their plant placement, potentially preventing the Astrocado Pit from being played. However, in order to play such a combo, one might need more than one turn, and therefore enough health or healing cards to hold off the Astrocado. 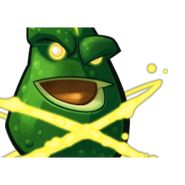 Astrocado with a star icon on its strength

Astrocado being the featured card in the menu for the 15th February, 2019 Daily Challenge