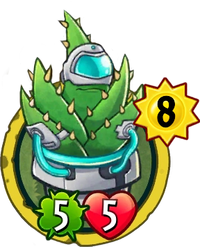 When played: Increase your Hero's maximum

by 10. Heal your Hero for 10.
Your Hero will feel out of this world. And so will your skin.

Astro Vera is a galactic legendary plant card in Plants vs. Zombies Heroes and a member of the

. It does not have any traits, and its ability increases the plant hero's maximum health by 10 and heals them for 10

. This ability stacks with each Astro Vera played and persists until the end of the match. The former ability cannot be nullified by Sneezing Zombie. 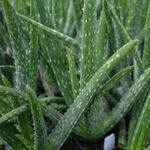 It is based on an aloe vera, a succulent plant species of the genus Aloe that is cultivated for agricultural and medicinal uses; and possibly the agave, specifically the sentry plant (Agave americana), a genus of monocots native to the hot and arid regions of Mexico and the Southwestern United States.

Its name is a portmanteau of "astro-," referring to it being in the Galactic Gardens set, and "aloe vera," the real-life plant it is based on.

Your Hero will feel out of this world. And so will your skin.

This card is very effective at being a clutch card, capable of bringing back the game since it heals you for 10

. You do not need to worry about playing this even if your health is over 10, as it also increases your maximum health, ensuring a large amount of healing to you when it is played.

You can combine this with Heartichoke to do massive damage to your opponent, finishing them off in two hits if Heartichoke is in Venus Flytraplanet as well. Pepper M.D. can also be boosted when you play Astro Vera, although there are better healing cards for Pepper M.D.'s sake.

Each Solar hero has their own ways of using this card well:

However, it is best not to rely on this plant's ability to change the game as your opponent may have powerful cards like Binary Stars or Gargantuars' Feast to deplete your health faster than you can heal from it. Be sure to use other supporting cards to survive the game, especially 2nd-Best Taco of All Time as this plant is quite expensive. It is also best to remove any Sneezing Zombies on the field, as you will only get a maximum health boost from the plant otherwise.

On top of its great stats, Astro Vera also has a dangerous ability. It is best to destroy it with an instant-kill card such as Locust Swarm and Rocket Science. It becomes even more dangerous should Heartichoke be on the field, as it can do 10 damage to you. Also, do not Bounce it unless it can ensure your win, as the plant hero can replay it to make it even more threatening. In addition, if Heartichoke is on the field, be sure to destroy her before Astro-Vera is played. Otherwise, you will take a great amount of damage and more than likely lose the game. If you cannot destroy Heartichoke, using Planetary Gladiator can sponge the damage you would take. Sneezing Zombie is also a good counter to this plant's ability, as she prevents your opponent from healing for 10. However, your opponent will still get their maximum health boosted, so they can heal above that by using healing techniques, especially the Heartichoke and Venus Flytraplanet combo. 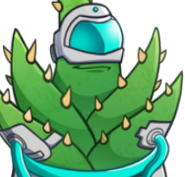 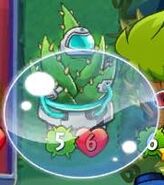 Bubble Up being played on Astro Vera 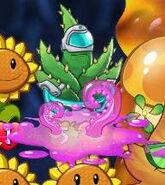 Astro Vera with the

Two Astro Veras on a lane due to Pair Pearadise's ability

Retrieved from "https://plantsvszombies.fandom.com/wiki/Astro_Vera?oldid=2147022"
Community content is available under CC-BY-SA unless otherwise noted.