When you play a Plant, do 1 damage to the Zombie Hero.
He's had good meetings with a lot of smaller asteroids. They really made an impression.
Astro-Shroom is a galactic super-rare plant card in Plants vs. Zombies Heroes and a member of the

Bullseye trait, and his ability does 1 damage to the zombie hero every time a plant is played. This ability stacks with each Astro-Shroom on the field and persists until all Astro-Shrooms are removed from the field.

He is based on a mushroom, the fleshy, spore-bearing fruiting body of a fungus; and an asteroid, a minor planet that does not show characteristics of a planet or active comet.

His name is a portmanteau of "astro-," referring to his appearance and him being in the Galactic Gardens set; and "mushroom," the real-life fungus he is based on.

His description makes a joke out of the double meaning of the word "impression," which means "effect on someone," but also "a mark impressed on the surface of something," referencing the way that smaller asteroids collide with larger space bodies, which Astro-Shroom resembles, leaving craters on their surface.

He's had good meetings with a lot of smaller asteroids. They really made an impression.

Although Astro-Shroom has average stats for his cost, his ability can do easy damage to the zombie hero, especially in rush decks already supported bythe Kabloom class. To fully utilize his ability, use cards that make more plants when played such as Shroom for Two, Pair of Pears, Mushroom Grotto, just to name a few.

These, in turn, allow Astro-Shroom to do more damage the more plants are made on the field without charging the Super-Block Meter thanks to his

Bullseye trait. Just remember that his ability is not tied to strength.

However, he has very low stats, meaning he can perish easily in the late game. To avoid this, it is best to play him behind a Team-Up plant like Puff-Shroom to protect him, or boost him to improve his survivability. Spudow and Captain Combustible can boost his health with cards such as Photosynthesizer and Fertilize.

However, take note that his ability only does 1 damage to the zombie hero for each other plant played, regardless of his strength. If you don't think a stat boost is viable, nor do you think he will be of much use anyway, you can play an evolution plant on him - and the ability will still somehow trigger.

It is also worth noting that Astro-Shroom is a mushroom, so he benefits from Buff-Shroom, who gives him a small boost, and Punish-Shroom, who applies pressure to the zombie hero so they won't hastily destroy Astro-Shroom.

Speaking of Captain Combustible, you can use this in tandem with Muscle Sprout. Playing many cheap plants allows Astro-Shroom to do damage as well as boost Muscle Sprout, making the two together very dangerous threats on the field. Spudow has access to many cheap Team-Up cards, which work well with Astro-Shroom. On top of rushing defensive cards, playing Poppin' Poppies can do 4 damage to your opponent all at once due to her ability.

Because he doesn't charge the Super-Block Meter when he activates his ability, playing this on Planet of the Grapes can guarantee you to draw a card whenever you play a plant, thus making sure you will not run out of cards while you are rapidly playing plants. However, keep in mind that only Nightcap can do this normally, and other Kabloom heroes will have to rely on High-Voltage Currant for a chance to get Planet of the Grapes.

You can also use Pair Pearadise to make two Astro-Shrooms, essentially doubling the damage when a plant is played. Then you may replace it with any environment you want, like Venus Flytraplanet. However, environments must be played the previous turn to conserve sun, as Astro-Shroom cannot survive for long.

Also, replacing Pair Pearadise just for that purpose may not be the best idea, as Astro-shroom doesn't live long due to the threat he poses to the zombie hero, and there are other better plants to play on it anyway. Speaking of Venus Flytraplanet, Solar Flare can play this in it to make sure she heals 1 every time a Plant is played.

This plant can damage the zombie hero quickly, as the plant hero will often play swarms like Shroom for Two to do cheap damage to the zombie hero without charging the block meter. In that case, try to destroy this plant as quickly as possible to avoid taking lots of damage. Using tricks like Bungee Plumber or Rolling Stone is the most effective way of taking him out, along with zombies such as Conga Zombie.

Armored 1 trait. However, watch out for Solar Flare and Nightcap, who can easily remove him with Bouncing and instant-kills.

Always remember that the

Bullseye trait works with abilities, so don't rely on the Super-Block Meter to save you from this plant. 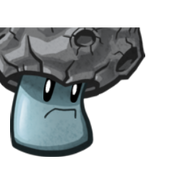 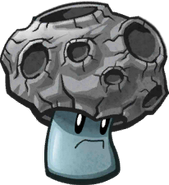 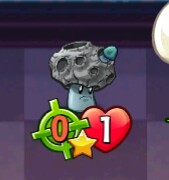 Astro-Shroom shrunken by Shrink Ray, note the small mushroom sticking out of his crater

Astro-Shroom tinted gray due to a glitch

Rolling Stone being used on Astro-Shroom

Astro-Shroom being the featured card in the menu for the September 20th, 2017 Daily Challenge

Two Astro-Shrooms on a lane due to Pair Pearadise's ability

Time to Shine being used on Astro-Shroom

Astro-Shroom with a star icon on his strength

Embiggen being used on Astro-Shroom

Astro-Shroom attacking from the player's point of view

Astro-Shroom attacking from the opponent's point of view