An asparagus enjoys a wonderful title as "the king of vegetables", however, Aspiragus never see it as a proud. From a young age, he has been enthusiastic on researching various hot weapons, and only when he's in the battlefield could he truly show his value. "I just hope that everyone could remember the hot-blooded me on the battlefield!" said Aspiragus seriously.

Aspiragus (芦笋战机; pinyin: lúsǔn zhànjī) is the second plant obtained in Sky City in the Chinese version of Plants vs. Zombies 2. It shoots asparagus seeds at a zombie either on its lane or lanes adjacent to Aspiragus. After attacking seven times, it rests for a second by pointing down and closing its eyes, whilst smoke pours out of its mouth.

Aspiragus is based on asparagus.

When fed with Plant Food, Aspiragus gains a helmet and fires at all spaces in his range, dealing 800 damage per shot to zombies.

His shots deal 1600 damage per shot and gains the ability to push zombies back.

Aspiragus is a really useful plant to use early in the game, as it's one of the only multi-directional plants the player can obtain easily. Aspiragus can take care of tons of zombie, as it can shoot in three lanes. They are really powerful in large numbers, as their damage will combine to nearly instantly kill all basic zombies. Aspiragus can also be used to breeze through early worlds like Pirate Seas or Kongfu World. It can also take huge chunks out of Zombots with its Plant Food effect. However, it does have a few second delay, as well as a random targeting system, which can be unreliable at times. On the other hand, the rest time is very quick - exactly how long it would take for Aparagus to attack once. 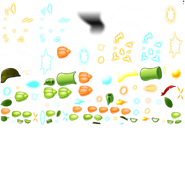 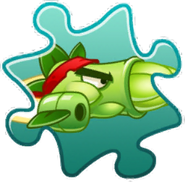 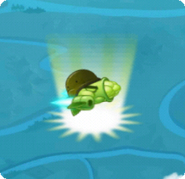 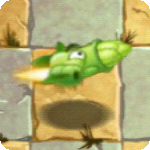 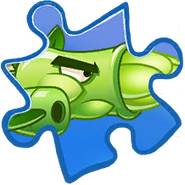 Aspiragus on a Gold Tile 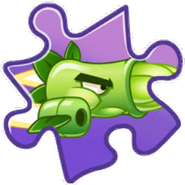 Retrieved from "https://plantsvszombies.fandom.com/wiki/Aspiragus?oldid=2360662"
Community content is available under CC-BY-SA unless otherwise noted.