After reclaiming The Plantagon Lot

Aspearagus was a plant in Plants vs. Zombies Adventures. To unlock the Aspearagus, the player needed to get the Fog-a-majig and rescue Matilda by reclaiming The Plantagon Lot. He fired projectiles (asparagus tips) that deal more damage than peas at a longer range, but fired them slower.

This plant is based on the asparagus (Asparagus officinalis), a spring vegetable and flowering perennial plant species in the genus of the same name.  His name is a portmanteau of "asparagus", the real-life plant he is based on, and "spear", referring to the design of his projectiles and style of firing them.

Aspearagus dresses up as himself on Halloween. He’s that fearsome.

Aspearagus had a relatively good range and was ideal for killing zombies when placed behind Peashooters. However, using him far enough away from zombies would severely lower Aspearagus's usefulness and you might have had to constantly spend 25 sun on Aspearagus, so he could kill zombies. The Aspearagus, because of his higher cost and slower harvest rate, should have been considered more valuable than Peashooters, but nonetheless should not have remained unused, as the extra range would help with killing zombies without needing to spend sun and money on Peashooters. Overall, 1 Aspearagus with a few Peashooters would be sufficient early on, but later stages may have needed 2 or 3 of them. After unlocking Shamrock, Aspearagus would not be of much use. High health zombies like the Imposter Zombie, Football Zombie, or Ice Block Zombie would be troubles for Aspearagus, because he is a slow shooter. 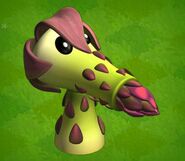 An advertisement on the Plants vs. Zombies Adventures Facebook page 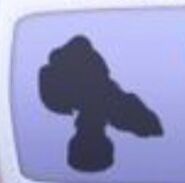 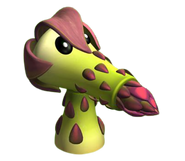