Super Rare
Every morning, the Armor Chomper dons his suit of armor and prepares for battle. He tries to lube up his joints during respawns so he doesn't sound too creaky.

Super Rare
Every morning, the Armor Chomper dons his suit of armor and prepares for battle. He tries to lube up his joints during respawns so he doesn't sound too creaky.
Armor Chomper is the Super Rare armored variant of Chomper in Plants vs. Zombies: Garden Warfare and the Rare armored variant of Chomper Plants vs. Zombies: Garden Warfare 2.

He is slower but has 50 more health (75 if upgraded), mark the total of 200 health (225 if upgraded and 215 in Garden Warfare 2), meaning that he is the playable character with the third most health in Garden Warfare 2, being only beaten by Iron Citron, Torchwood and Z-Mechs (not including Boss Mode and the Infinity Robots). The Armor Chomper was introduced in the Zomboss Down DLC pack in Garden Warfare.

Every morning, the Armor Chomper dons his suit of armor and prepares for battle. He tries to lube up his joints during respawns so he doesn't sound too creaky.

Though his armor slows him down, he has added health, and his bites deal extra damage!

Emptying out his pockets has lightened the load, and allows him to move faster.

Zombies cause indigestion! Having iron stomach-plating makes the agony pass a little quicker.

Now that he eats a balanced breakfast every morning, he is feeling healthier than ever.

Despite Armor Chomper's extremely high health, it is possible for him to be overwhelmed due to his low movement speed, which is why the Burrow is crucial to the Armor Chomper's survival along with the speed upgrade. When playing as Armor Chomper, always stick close to teammates near objectives. By doing this, the player can successfully halt objectives with his high health, tank damage from enemies, and keep his health up. Though optional, it might be useful to hold the Super Sticky Goop for the extra second could mean your life.

Armor Chomper excels in the Gnome Bomb due to his tanking ability while carrying and defusing objectives even though having a side-effect for being slow.

If the player ever wanted to kill for increased bounty it is best to equip Sprint Burrow and Cheesy Goop ability especially when you directly hit a zombie with the goop which can deal up a total of 25 damage. This will lead you killing any zombies with 125 health with just two Metal Chomps and that is why a Sprint Burrow is equipped because if you choose to swallow, it is a lowly decision except when having a low health. 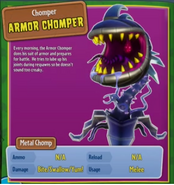 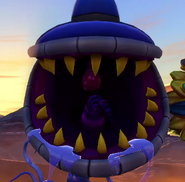 Armor Chomper in the Zomboss Down trailer

Armor Chomper about to use his Burrow ability 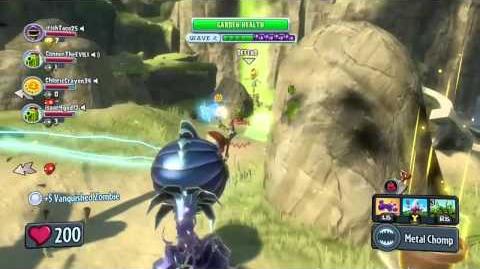