Arma-mints launch a volley of heavy stunning projectiles and provide a temporary boost to all Arma-mint Family plants on the lawn.

Spending 100 mints
"Lobbing projectiles, for me, has always been a very personal endeavor," says Arma-mint. "It's a great way for me to express myself, my identity, and my preference that zombies can be defeated in large groups."

Arma-mint is a Power Mint plant in Plants vs. Zombies 2. It can boost Arma-mint Family plants by increasing their damage, firing rate (for cannon plants), and other abilities. It will also release a barrage of projectiles on random tiles that deal massive damage to all zombies in a 1x3 area and stun all zombies in a 3x3 area.

Like other Power Mints, Arma-mint cannot be imitated or affected by other mints. He remains on the lawn for 6 seconds (at Level 1).

Arma-mint can be purchased from the Store with 100 mints while he is available.

Arma-mint is based on the mint, while also incorporating elements of cannons/mortars.

Its name is a portmanteau of "armament," which means military weapons and equipment, and "mint," the real-life plant it is based on.

Arma-mints launch a volley of heavy stunning projectiles and provide a temporary boost to all Arma-mint Family plants on the lawn.

"Lobbing projectiles, for me, has always been a very personal endeavor," says Arma-mint. "It's a great way for me to express myself, my identity, and my preference that zombies can be defeated in large groups."

Note that Arma-mint's recharge is 30 seconds shorter during the Improve-mint event.

Arma-mint is very useful in most artillery based strategies, as its effect boosts the damage of all the plants in its family, as well as the recharge of Coconut Cannon and Banana Launcher, making it very effective at clearing out large amounts of zombies. Arma-mints other affect is also good since it can stall the zombies for a decent amount of time, as well as picking off lower health zombies. It should be noted however that Arma-mint does not fire its projectiles immediately after its planting, so there has to be some planning and good timing when using Arma-mint.

As Arma-mint's family consists almost entirely of lobbed-shot plants, Arma-mint based strategies are very effective in Ancient Egypt and Dark Ages to help avoid tombstones. It is also pretty effective in certain Lost City levels without the Parasol Zombie, as Arma-mint family plants can take advantage of the Excavator Zombie, as well as the Gold Tiles to help generate sun for more expensive plants.

Arma-mint has noteworthy synergies with Banana Launcher, Coconut Cannon, and Melon-pult. When boosted by Arma-mint, Banana Launcher and Coconut Cannon have their damage increased and their reload rate decreased quite significantly, making them excellent at clearing hordes of strong zombies. Melon-pult on the other hand gets a sizable damage increase, making him very effective at clearing out hordes of zombies in general.

Avoid using Arma-mint in "don't lose more than X plants" as it disappear after a while. 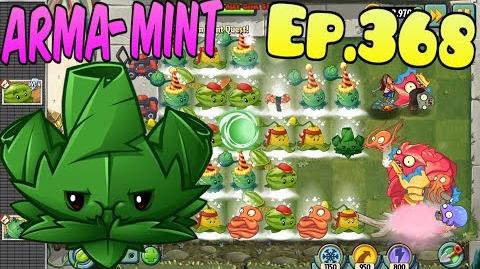