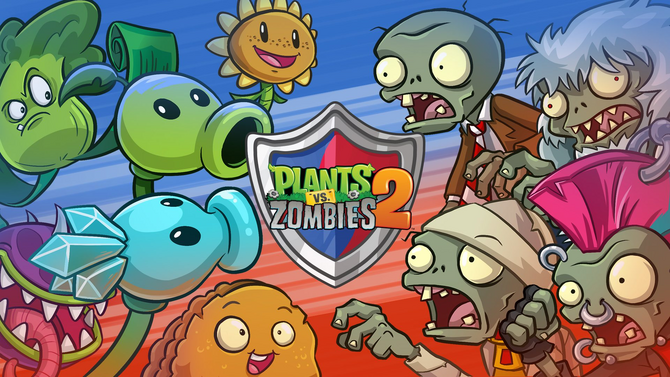 For similar game modes in the Chinese version, and Plants vs. Zombies: All Stars, see PvP Mode and Arena (PvZ: AS) respectively.

Arena (known as Battlez until 7.5.1) is a player vs. player game mode in Plants vs. Zombies 2 that was introduced in the 6.6.1 update. This mode is unlocked after getting the Map of Space-Time-Ness from Ancient Egypt - Day 1 and obtaining at least six plants.

To start a match, the player has to use a Gauntlet. Gauntlets can be bought with gems. However, every four hours, the player receives a free play. The player can press the 'FREE PLAY' button, which is located to the left of the Play Button, to watch an advertisement and obtain a free gauntlet. Up to four free Gauntlets per day can be obtained by watching ads.

When an opponent is found, the player will usually choose five plants, with the first slot reserved for the plant of the week. Once the plants are chosen, the player is set in the Last Stand format, then after setting-up, the "battle" begins. The player gains points based on the distance the zombies are away from the house, and their starting health. Zombies in the yellow zone are worth their full potential of points, while zombies in the red, blue, and brown zones being worth 60%, 40%, and 20% of their potential respectively. Points can also be scored by removing most forms of armor through any method. Zombies buffed by Cardio Zombie are worth extra points. Destroying Gravestones and Surfboards are also worth a small amount points.

This mode is time-based, and the zombies have significantly more health, with higher leagues having even higher health. Zombies can often survive multiple instant-kills. Zombies will also eat significantly faster causing most plants to be eaten instantly. The faster the player kills the zombies, the more health they will have. Having a non-defensive plant getting eaten will result in a penalty, causing the zombie health to be reduced and therefore significantly reducing the score they will give. Having a sun-producing plant getting eaten or manually launching a Lawnmower will result in a big penalty, and if a zombie activates a mower, this will result in a huge penalty. Winning a match of Arena is brought about by getting a higher score than your opponent, and grants the player five Crowns, whereas losing a match only yields one crown. Surrendering will count as a loss, but will grant no crowns.

Most of the player's upgrades (except Instant Recharge, Wall-nut First Aid and Mower Launch) are removed in this mode. The player also can not spend 1000 coins to buy Plant Food, or use Power Ups in this mode.

Current possible rewards for the Reward Streak (in order):

NOTE: Rewards may be doubled in some tournaments.

Each week, there will be a different type of tournament that the player will have to compete in. Each type of tournament has its own way of changing the gameplay (the change can be quite minor, though). For example, a tournament can shorten the time it takes for a match to finish. It could also be quite major (for example, from 17th July - 19th July 2018 Grapeshot's Double Shot Tournament lasted 2 days and the rewards were drastically decreased).

Also, this mode also has several different leagues; the player gets promoted if they place top 3 in their league by having a number of crowns higher than all but two or less other players in their league. If they are placed in one of the last three spots, they will be demoted to the league before that one (this is not the case in the lower leagues, where special methods are required to be demoted). Several gems, mints and coins are rewarded in promotions.

It has been noted that this mode does appear to be lacking a "real" matchmaking feature that pairs you with another player fairly. There have been reports of people that had low-leveled plants to still be paired with a person with max-leveled plants or still high-leveled plants. Players can also be paired against bots that solely calculate their score based on the players.

Seasons were firstly introduced in the 7.3.1 update. In Seasons, the players could get rewards after they collect crowns from all of the tournaments, such as coins, gems, piñata, or seed packets of the featured plants. Each season has one featured plant and also new tournament called Boosterama where all plants are boosted and in the end of each Seasons, there is a Boss Fight Tournament. Seasons list are below here: