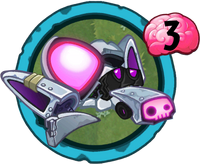 Frenzy.
"Zombies from outer space? What an absurd conspiracy theory! Now move along. Nothing to see here." - Dr. Zomboss
Area 22 is a galactic super-rare zombie environment card in Plants vs. Zombies Heroes and a member of the

to play, and its ability gives all zombies in it +2

Frenzy trait. This ability persists until Area 22 is overridden by another environment.

It is named after Area 51, a highly classified remote detachment of Edwards Air Force Base, within the Nevada Test and Training Range.

Its description references the many conspiracy theories surrounding Area 51, most being about aliens.

In addition, "22" might be a reference about how it is zombie-related, seeing the letter "Z" and the number "2" look somewhat similar. The 22 also references the stats that the environment gives, which is +2

"Zombies from outer space? What an absurd conspiracy theory! Now move along. Nothing to see here." - Dr. Zomboss

Frenzy trait, and since it can boost multiple zombies over time until overridden, you do not have to wait until you get to set up a strong zombie. These aspects allow it to find a place in any deck, especially those that feature zombies with an ability that activates when they do damage or destroy a plant, such as Interstellar Bounty Hunter, Kite Flyer, and Overstuffed Zombie. (While it does become a bit redundant for zombies who naturally have the

Frenzy trait, Area 22 still won't be a complete waste thanks to its stat-boosting ability.)

For synergy, since this is a science environment, Interdimensional Zombie will transform into a random zombie that costs 3 brains, resulting in a 3

zombie with boosted stats and the

Frenzy trait on turn 3. However, this strategy may not pay off due to the resulting zombie being random, and only Immorticia can do this normally. Instead, a more universal and reliable (and possibly stronger) combo is with Ancient Vimpire, who will be able to boost the zombie in Area 22 further if that zombie destroys a plant.

If you see a decently powerful zombie and your opponent has conserved 3 brains, it may not be a good idea to block it with a weak plant since they could be waiting to play Area 22, which allows the zombie to tear through said plant and hit you harder than before. If you see a strong zombie in Area 22, try to destroy that zombie with removal cards, or if you are able to predict Area 22 being played, set up a plant strong enough to destroy the zombie there even with a +2

As for Area 22 itself, you can override it with an environment of your own, preferably something cheap like Coffee Grounds or Spikeweed Sector. 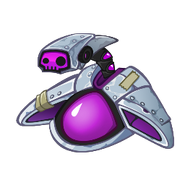 Area 22 being replaced by Hot Lava

Neutron Imp seen in the "cockpit" of Area 22

A concept design being played (animated)