Super Rare
The Arctic Trooper spent last winter assigned to the Zomboss Arctic H.Q. where he learned survival tricks and ate a bunch of snow.

The Arctic Trooper spent last winter assigned to the Zomboss Arctic H.Q. where he learned survival tricks and ate a bunch of snow.

The Arctic Trooper's icy shots slow, and eventually freeze Plants in their tracks!

The Frozen Z-1 Assault Blaster is the primary weapon of the Arctic Trooper. The facts below apply to a fully upgraded weapon.

The reloader sometimes gets iced up, but the less frozen one is great! The reload time has reduced for sure!

Ammo capacity increased through clever use of arctic pockets.

The Arctic Trooper is good for players that can reliably stay focused on their target as landing around 15 consecutive hits with the Arctic Trooper will freeze the enemy solid, fully immobilizing them and rendering them unable to use any abilities.

If you wish to use the Arctic Trooper effectively, you need to be able to reliably land your hits as missing too many shots may cause you to empty your entire magazine without freezing your opponent. Once you do freeze them though, it gives you enough time to do one thing, this can be, for instance, reloading your weapon so you have a full magazine ready by the time your opponent unfreezes, activating the ZPG and trying to shoot it before they get free or use the time given to escape if you are severely injured.

Do not try to do more than one thing while your opponent is frozen though, as you will run out of time, since three seconds is not much. 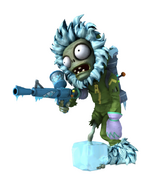 Another image of the Arctic Trooper 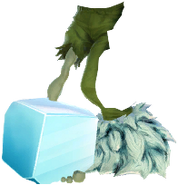 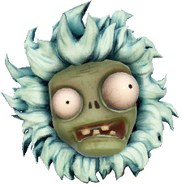 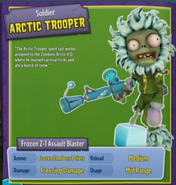 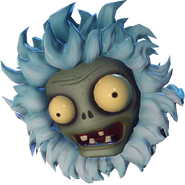 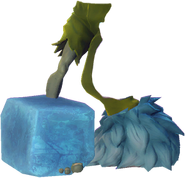 Arctic Trooper in the loading screen, along with the Yeti King, two Yeti Imps, AC Perry and Hockey Star